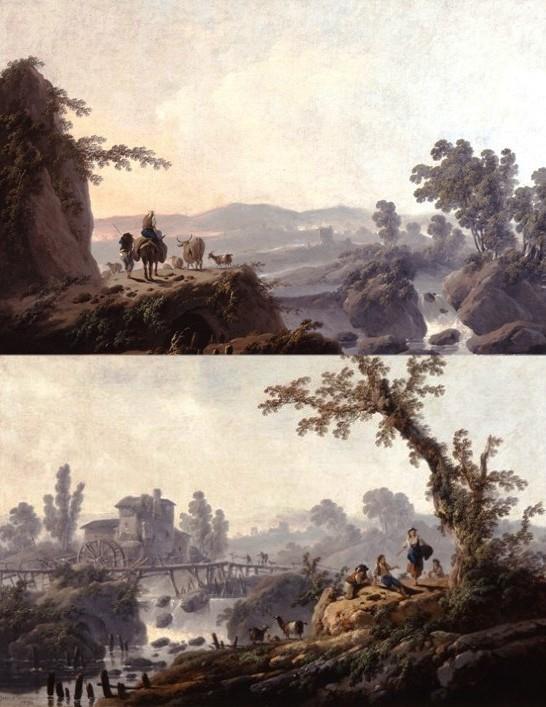 
oil on canvas,
both signed and dated, the former 1792, the later 1793
with very fine eighteenth century southern Italian frames

Pillement was a prolific and versatile artist who worked throughout Europe in a long career of ceaseless activity and travel. He worked in most media with a huge and variable output and it is important to distinguish between his two roles, that of designer and decorator, filling pages with chinoiserie scenes, imaginary flowers and occupations for the four seasons, and his status as an important French Rococo painter, and arguably the finest exponent of the medium of pastel in eighteenth century landscape and marine painting.
Our family has been long involved in buying and selling the drawings, watercolours, pastels and oil paintings of Pillement, who developed his own interpretation of the landscape genre, derived from the work of Nicolaes Berchem, Claude and Joseph Vernet, François Boucher and a blend of observed nature and rococo fantasy. Once the success of this formula had been successfully established, the artist maintained the same style, unaffected by changes in taste. Thus, among his exhibits at the Society of Artists (1760, 1761, 1762) and the Free Society of Artists (1763, 1773, 1779) landscapes with cattle, travellers and coast scenes predominated. The same applies to the hundreds of works dispersed through auction in March, 1761, from the collection of the French print dealer and publisher Charles Leviez prior to Pillement’s departure from London. Among a number of English patrons, the actor David Garrick was the most notable. In 1772, the artist painted eleven pictures for Garrick’s villa near Hampton Court, and their surviving correspondence reflects the excellent relations that Pillement enjoyed with his English patrons. By chance, the best known works by Pillement in England were acquired, after the artist’s death, by the Duke of Wellington during the Peninsular campaign in 1814 and remain at the family seat at Stratfield Saye, Hampshire.
After London, Pillement made a brief visit to Italy before working in Vienna, at the Hofburg (1763-4) and for the Prince of Liechtenstein, before moving on to further decorative interiors for the King of Poland (1766) at the Royal Castle in Warsaw, and the Ujazdow Palace. He was invited to work at St Petersburg but went with his family to Avignon (1768). Pillement’s unconventional career deprived him of recognition in his native country, but he exhibited at the Paris Salon in 1776, and executed a suite of three paintings for Marie-Antoinette at the Petit Trianon, Versailles. By 1780, he was again in Portugal where he decorated a celebrated small dining room near Sintra, later recorded by the enchanted William Beckford. His five large canvases of elegant company in the gardens at Benfica, Lisbon (Musée des Arts Decoratifs, Paris) are unique achievements, and further emphasize the versatility of the artist. During a stay in Oporto, he established a teaching studio and taught a number of Portuguese painters, among whom Joaquim Marques is the most notable.