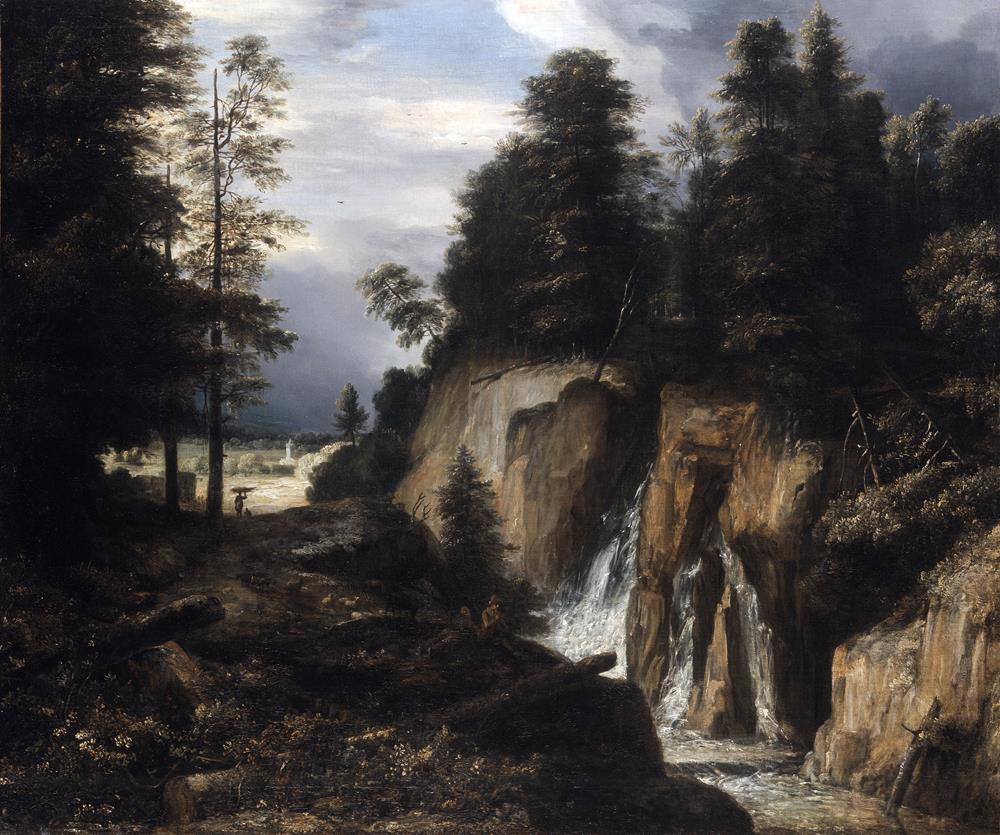 Roelant Roghman painted forests and mountainous landscapes, although his drawings and etchings are better known than his elusive paintings. The drawings, of both topographical and imaginary scenes, bear a likeness to Rembrandt’s, which clarifies the long-standing association with his fellow Amsterdam master. There remains, however, no evidence to prove that Rembrandt taught Roghman. Houbraken states that as well as only having one eye, Roghman was a ‘good friend’ of Rembrandt together with Gerbrand van den Eeckhout.That Roghman’s paintings influenced the handful of known Eeckhout landscapes is indisputable. Beyond the basic facts such as baptism, demise, a few commissions and some travels, porportionately few reliable details seem to have come to light about Roghman’s life and working career. Two eyes or not (!), between 1646 and 1647 he produced two hundred and forty one drawings in chalks and pen and ink washes of many of the Dutch provinces’ castles and country estates; and although his work includes Alpine scenery, and other imaginary landscape, there is no proof that he travelled south.
With most of his approximately thirty known paintings unsigned and, more importantly, all of them undated, much of our knowledge of Roghman’s oeuvre derives, unusually, from his mother – Maria Savery, Roelandt Savery’s sister. Named after his venerable uncle, Roelant most likely undertook his earliest tutition with this multi-faceted artist, Savery the ‘Rudolphiner’ whose paintings, etchings and drawings were fundamental to the development of imaginary landscapes depicting mountainous terrain. Without digressing, it would be misleading to omit the equally important status of Esaias van de Velde and Hercules Segers in propagating this genre of Dutch landscape. Loosely speaking, this first generation of painters put imagination centre stage with the ‘real’ in their landscapes. Moreover, whilst the 1630s and 1640s were dominated by the renown of the tonal periods of Jan van Goyen and Salomon Ruysdael, there was a resurgence in the Alpine- or Scandinavian-inspired scene by the 1650s. Our Rocky landscape with a waterfall goes beyond the realm of the everyday, supplementing it with drama and emotion.
Surrounded by fallen tree trunks and mossy rocks, two herders recline on an outcrop above a river canyon. On the far side of the chasm, cliffs and shattered trees are steeped in an intense ochre sunlight as waterfalls tumble into the churning river. Offsetting the sensation of space and depth above the chaos, the dark foreground is modelled in rich browns and unlit greens, flanked by solemn spruces and oaks. A figure gathering firewood is silhouetted at the end of a path, beyond the livestock and a lush meadow next to a tower opens up in the starkly lit distance.
If we knew more about Roghman’s working life, the absence of a date in this unsigned picture would be far less of a barrier in classifying him, or at best, furthering our understanding of his paintings. Our painting is closest in style to Mountainous landscape with waterfall (Rijksmuseum, Amsterdam, no. A 760,) one of four Roghmans in the museum. Nearly all biographical information starts along the lines of ‘Roghman was a rare Amsterdam landscape painter’ but he was without doubt an original one - original in his individual interpretation of an established landscape tradition, earlier known as the ‘Tyrolean view’. Savery’s Tyrolean pictures were executed for Rudolf II in Prague but were evidently known about back in Amsterdam from drawings and etchings. Patrons and artists were fascinated by them. To look at Savery’s marvellous pen drawings of the Tyrolean mountains from the first decade of the seventeenth century is to foresee the continuation of this non-Dutch landscape genre through to the 1650s and beyond.
The master of the Dutch panorama, Philips Koninck, displays a comparable palette and fleecy execution to Roghman, but as a documented Rembrandt pupil, Koninck pays homage to the towering Hercules Segers, albiet via his great teacher, himself the owner of several Segers paintings (the most famous of which now hangs in the Uffizi). Other Rembrandt pupils who shared similarities with Roghman’s landscape style are van den Eeckhout, as discussed, Govaert Flinck and, rarer still, Aert de Gelder. But it was perhaps Savery’s legacy that steered Roghman more than imagined so far. Although Jacob van Ruisdael went on to outshine him, the innovator of the Scandinavian torrent, forest and mountain scene, Allaert van Everdingen, was also taught by Savery. Justly some historians see the ‘Scandinavian’ landscape as the logical convert from the wooded mountainsides of the Tyrol. So it is harldy surprising, and no coincidence either, that Rocky landscape with a waterfall was formerly catalogued as by Everdingen. Savery travelled and sketched in the Tyrolean Alps (his single tree studies are particularly compelling). Everdingen went to Norway in 1644 and thus neither ever wholly abandoned the truth in their landscape art. Roghman’s work, on the other hand, relies on these legacies of Savery’s scenery, Joos de Momper’s Alpine fantasies and perhaps the later mountain scenes by Esaias van de Velde (see Hilly landscape,1624, Narodni Gallery, Prague) all in opposition to the tonal landscapes that preceded him. The two shepherds in Roghman’s Rocky landscape with a waterfall enact the same role as Everdingen’s few but ever-present figures. Rather than domesticizing the scene they are diminished by the sense of wildness in the bleak and rugged setting.
In blurring the conventionally ‘real’ and the imagined, Roghman ironically produces a very ‘Dutch’ example of a non-Dutch landscape.