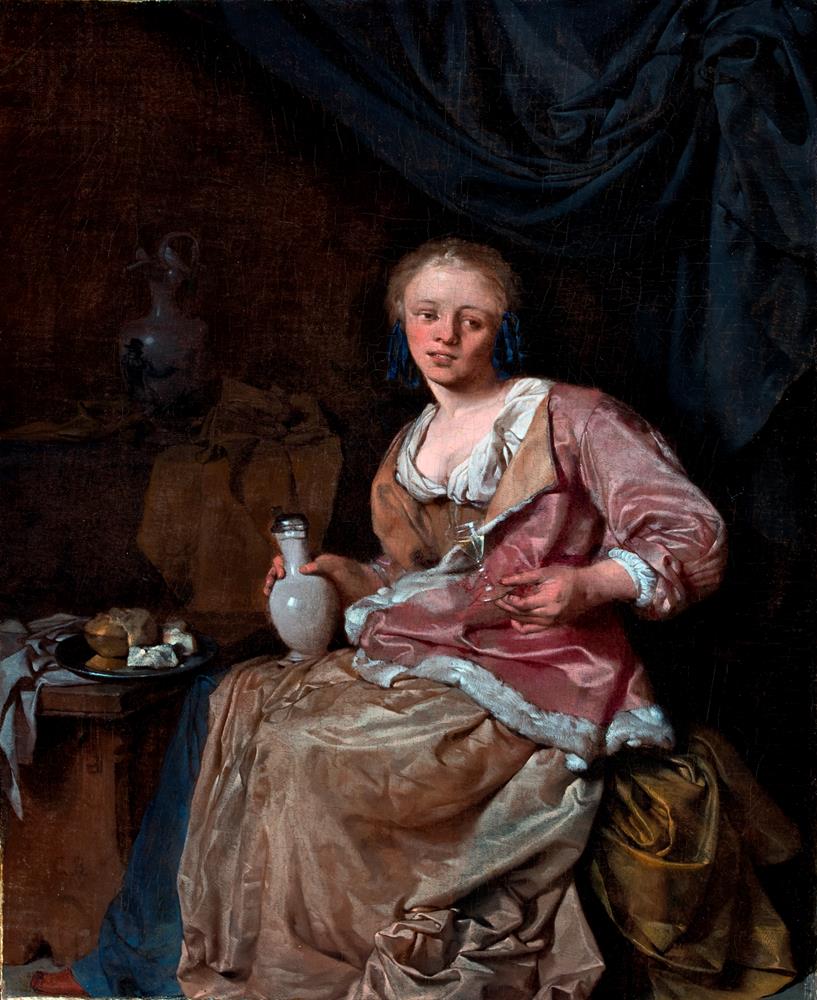 One of the most obvious but striking things about the ‘Golden Age’ of Dutch painting is the shortness of its history. The phenomenon lasted barely seventy years from about 1610 to 1680 but was amazingly rich in quantity and quality of achievement with many schools of painting forming independently from one another within one generation.

In terms of one life-span it is remarkable to note that Cornelis Pietersz. Bega was seven or eight years old when the leading Mannerist painter, Cornelis van Haarlem, died in 1638. Van Haarlem was also Bega’s grandfather on his mother’s side. The son of a goldsmith, little is known about Bega’s early life but in 1654 he joined the painter’s guild in Haarlem, establishing himself in Arnold Houbraken’s words as Adriaen van Ostade’s ‘eerste en beste leering [first and best pupil]. The heir to Adriaen Brouwer, Van Ostade was the unrivalled exponent of the Haarlem School ‘low life’ subject matter. His groups of peasants, and often whores, in poorly lit taverns and interiors were records, however crude, of everyday life.

Painted in 1663 or 1664, our recently discovered Young Woman with a Jug and a Wine Glass endorses Houbraken’s view but also establishes, in all its beauty, how far Bega outstripped his rivals. Just how far we will never know; within a decade of joining the guild Bega’s life and vocation were laid to rest in St. Bavo’s cathedral. His finest work came from his last few years (see his Astrologer, 1663 National Gallery, London, Alchemist, 1663 The J. Paul Getty Museum, Los Angeles and Sleeping Maid) so the plague caught Bega in full flourish. Indeed of the nine recorded paintings dated 1663, no fewer than six are now in museums.

In 2012 Cornelis Bega’s distinction and acclaim was greatly enhanced in the form of a wonderful exhibition Eleganz und Raue Sitten (Elegance and Boorish Manners) – Cornelis Bega. It was the first ever exhibition devoted to Bega and the director of the Aachen City Museums, Peter van den Brink, and a team of scholars successfully tracked down as many paintings and, crucially, rarely seen drawings, from both major and smaller museums as well as private collections worldwide. Like the men and women depicted in his paintings, many of the works emerge in unison from the somewhat shadowy legacy of an all too short career. The unusual exhibition title aptly holds the key to fully appreciating Cornelis Bega; the juxtaposition of an outstanding colourist with the anonymity of the ‘low life’ Dutch interiors or perhaps the contrast of the light of his talent with the restrictive dark of the genre. Rather than outgrowing the van Ostade legacy, Bega’s style and palette developed in his last few years into something more monumental. The picture formats became mostly vertical as the number of figures dwindled in his compositions. The bolder treatment of the figures and exquisite handling of draperies drew away from the unchangingly sparse and monochrome gloom of the tavern or house interior backdrops. In these penultimate paintings the blurred iconography of the settings recedes in priority and Bega’s sitters, conjured in a palette of steely blues, greys and salmon pink passages, come to the fore.

With Young Woman with a Jug and a Wine Glass, as much as anything, Bega invites the onlooker in to his world. Yet again we encounter the proverbial ‘snapshot’ of life in seventeenth-century Holland that continues to fascinate today’s collectors and scholars nearly four centuries later.