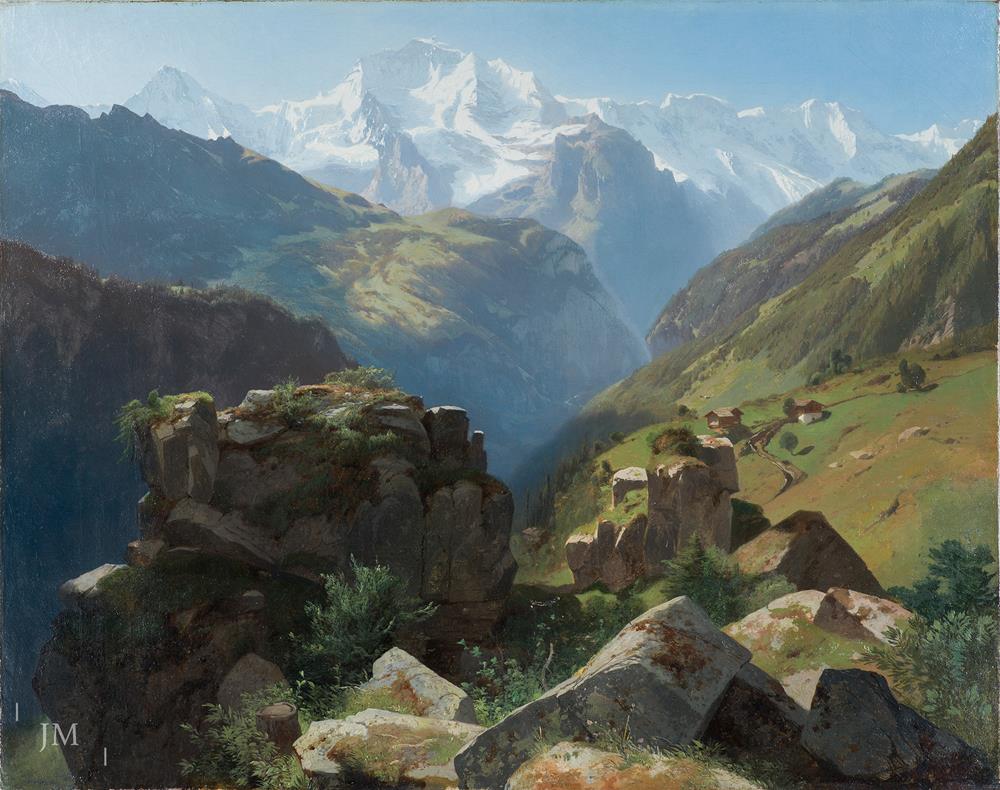 Seen from high up above Zweilutschinen looking south, this is a striking view of the Jungfrau with the Monch to its right. It would be hard to find a more complicated composition in terms of picture planes and receding tones and colours. The canvas is a masterpiece in this aspect alone. The winding path to the right, with chalets either side, links the foreground with the middle of the landscape. The Jungfrau Massif was chosen to be on the cover of the catalogue accompanying Den Ville Natur Sveitsisk og Norsk Romantik in Tromso, Norway in 2007. This pioneering exhibition brought together works by Swiss and Norwegian Romantic painters in order to study their shared ideals and inspirations. Together with many other pictures by Calame this panoramic tour de force was also much admired in the exhibition entitled: Forests, Rocks and Torrents held at The National Gallery in London (2011). As the most important Swiss landscape painter of the early nineteenth century Calame enjoyed an international success with collectors and agents for his work as far afield as Russia. He was the first artist to dedicate himself to depicting the Swiss Alps with topographical accuracy and from first-hand experience. In 1835 he went on his first study trip to the Bernese Oberland, famous for its spectacular mountains and valleys, and would spend nearly every summer in the Alps for the next twenty-five years, often journeying and working on his own. Ever aware of the transience and feeling of the moment, Calame’s words from a letter to his wife offer a lasting interpretation of his landscapes: “Nothing elevates the soul as much as the contemplation of these snowy peaks…when, lost in their immense solitude, alone with God, one reflects on man’s insignificance and folly.’ The majority of his paintings and drawings were done before the ‘Golden Age’ of mountaineering which began in the mid-1850s. And yet it was only Calame’s frail lungs that prevented him from working at a higher altitude; up beyond the ends of the glaciers and fulfilling his mission to become the first artist to faithfully sketch and paint from nature the high mountain passes, glaciers and summits. That accolade was to go to Gabriel Loppé, born fifteen years later than Calame.