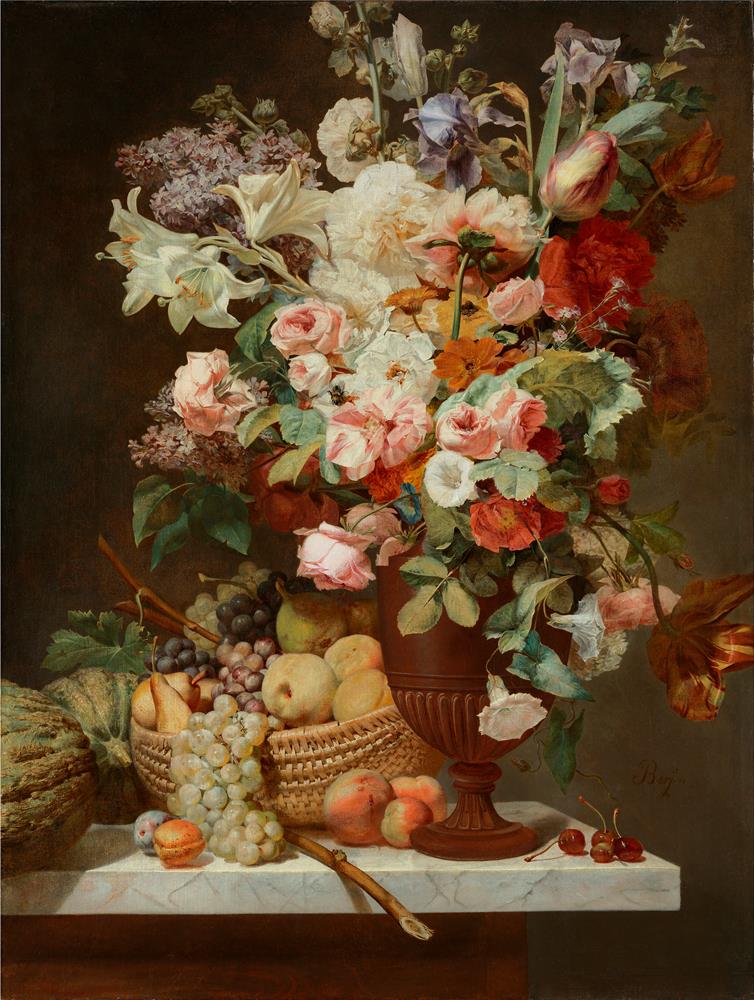 
This is the first large oil painting by Antoine Berjon available for sale in over thirty years. Even in the context of the Lyon school of flower painting, the richest in France, Berjon’s magical qualities of originality, poetry and mystery were unmatched. In Berjon, France possessed one of the most technically gifted still life painters in the history of the genre. And yet given such a life span of eighty-nine years the paucity and scarcity of known and unknown paintings and drawings has undermined his neglected genius. This very evident rarity has bedevilled the chance to breathe new life into his work and, crucially, bring it to a wider audience.

There are three remarkable large oil paintings by him in the Louvre, in the Musée des Beaux-Arts, Lyon and in the Philadelphia Museum of Art, and all share the same air of mystery and tension present in this powerful composition. The careful arrangement of the fruit and flowers and sharp delineation naturally display Berjon’s knowledge of Dutch still life from the Golden Age, but the prominence given to the cut stem in the foreground and the distinctive, white radiating light from the centre, including the ‘signature’ bee are hallmarks of his highly individual style.

This spectacular still life of flowers stands out as one of Berjon’s masterpieces in its density, vigour and grandeur. On first hand inspection this picture also neatly dispatches any claim that Berjon was merely an accomplished flower painter taking his place behind his undoubtedly more famous and successful contemporaries from the North, and all with Flemish roots, namely, the van Spaendoncks, Redouté and Van Dael. As an equally superb drafstman and colourist, Berjon was in fact a highly original artist. The satin finishes on his roses, magical sheen of the basket, ethereal lighting and the daring and protruding cut vine, to name a few keynotes, betray the hand of a rare and beautiful ‘Master’ in the best sense of the term.


The discipline and conventions of flower painting have always presented a challenge to the creative artist not felt by the craftsman painter. Among the artists who have succeeded in expressing their personality through flowers, Antoine Berjon is one of the most fascinating. Standing in front of his pictures in the Louvre, Philadelphia, Lyon or a private collection fortunate enough to include a Berjon, one instantly recognizes his hand and the measure of his artistic personality. Seeing his work hanging together is to realize that such a mastery of his subject, such evident individual emotion, could only be the product of a prolific artistic output.

The young Lyonnais started out working for a silk manufacturer who specialised in church vestments and embroideries although he had, in fact, been destined for the Church – or becoming a doctor - before studying flower design at Lyon’s Free School of Drawing. In 1794 a Revolutionary Army staged a three month siege of the city, in the process destroying the silk industry that had, at its peak, employed some 18,000 people fifty years before. Together with many other young painters Berjon left the beleaguered city to seek work in Paris where he could partly rely on some contacts and silk designers. His first Salon exhibit in 1791 of three flower paintings and a pastel of fruit and flowers found favour with the critics who compared his work to the Empress Josephine’s favourite painter, Jan-Frans van Daël. By 1810 Berjon was back in a revitalized Lyon firstly employed by the silk manufacturers Bissardon and Bony who made the Empress’s coronation robe and supplied silks for many of Napoleon’s palaces yet in July that year he was then appointed as the professor of flower design at the Ecole des Beaux-Arts. In thirteen years in this role Berjon taught over two hundred pupils but, alas, his well-documented egotism and irascibility cost him his livelihood as he was dismissed in 1823. He spent the last two decades of his life as a recluse if not in poverty as the city gave him a generous pension. He was honoured by a memorial exhibition of his works in Lyon in 1843.


Despite Berjon’s reputation of excellence amongst museums and collectors around the world there has never been an exhibition of his elusive paintings and drawings outside his native Lyon and not for want of trying. A future exhibition should be aptly named, Antoine Berjon- Painter of Mystery.