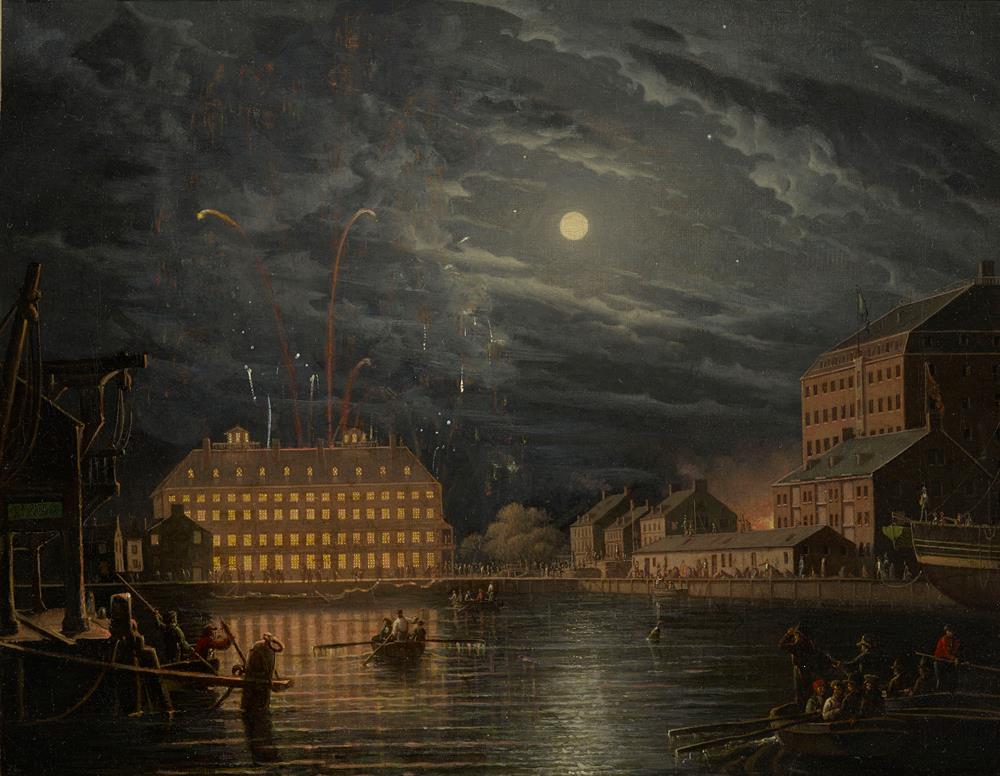 Sold - Summer 2015 to a US private collector

Long forgotten about for over a century this small canvas from a collection in south-western France undoubtedly corresponds to Salmon’s entry, the first for the year 1838, in his catalogue of his own paintings:
no. 879 Janwery 1838 17 by 14. Whig Victory Lumination at South Boston (w work?) 6 Days.
Until now the picture was traditionally considered to depict a street fire with gunpowder explosions, both subjects that Robert Salmon liked to capture, but with the invaluable help of Professor Wilmerding (see Literature above), we have been able to positively identify the painting as above, namely a celebratory firework display - or ‘lumination’ -accompanied by a hundred gun salute. Research has shown that the evening in November 1837 was hosted by John W. Fenno, the son and heir of the founder of The Gazette of the United States, a newspaper that played a major role in the shaping of party politics in the United States in the 1790s. Indeed the event was recorded in the Gazette:

On Tuesday evening last a brilliant festival was given at East Boston, by John W. Fenno, Esquire, in honor of the recent glorious whig victories in New-York. It was held in Maverick House, the largest hotel in the city, gorgeously illuminated for the occasion.

The banquet hall and hotel, Maverick House, was built in 1833 and survived until 1929. The building dominated Maverick Square, the main commercial hub of East Boston, and it served as both a summer resort for the wealthy and an overnight stay for people sailing to Europe or catching a train further north. It was subsequently owned by Patrick Kennedy, father of Joseph and grandfather to J.F.K, who established a wine and spirits importing business there having worked as a young man on the East Boston dock.

Salmon’s composition is artfully balanced between the oarsmen watching the scene in the lower right and the docking quay on the lower left. Employing the perspective of adjacent buildings, the viewer’s gaze focuses on the glowing gas-lit windows of Maverick House and the bright moon beyond. Despite so much activity in the background with a raging bonfire, shooting fireworks and smoke all seems calm and almost contemplative out on the water. Moonlit water is dripping from the oars in a characteristic painterly flourish.

Robert Salmon was born in Whitehaven, Cumbria and by 1806 was living and working in either Liverpool or Greenock. In 1828 Salmon left for Boston where he remained for the next fifteen years. He painted over a thousand pictures in his career and more than four hundred of them in Boston.
Robert Salmon became the outstanding marine painter of his generation and his maritime subjects played a central role in the development of the Luminist Movement in nineteenth century American landscape painting, a genre made famous by the likes of Fitz Hugh Lane and Martin Johnson Heade, now considered amongst the greatest American painters of all time.
Although Salmon was not alone in moving to America to seek a wider and wealthier patronage, he was wholly responsible for importing the Anglo-Dutch tradition of marine painting into American art. Salmon’s style loosely followed that of the van de Velde family, and as a young man in Liverpool he had attended many auctions and exhibitions of pictures by de Vlieger, Ruysdael and Canaletto.

With a distinguished clientèle made up of some Boston’s oldest families and living right on the harbour’s wharves, the successful ex-patriot may indeed have considered himself Boston’s answer to Canaletto! The consistencies of quality and originality in his paintings never changed over four decades. In his later years he turned more and more to moonlit scenes depicting smugglers, fishermen, shipwrecks and castles including over a dozen scenes with outbreaks of fire.

Only one other ‘lumination’ scene is known of, The Illumination of the Liverpool Town Hall (on loan to the Liverpool City Hall from the Walker Art Gallery) which took place to commemorate the Prince of Wales and Duke of Clarence’s official visit in September 1806. Several thousand crystal lamps were used to wreathe the entire building. According to the Liverpool Chronicle it “presented the appearance of an enchanted temple…and formed an object of grandeur and splendour almost beyond conception.”
That Salmon should witness such a similar event thirty years later across the Atlantic is coincidence enough but to have again captured the scene in oils, and so accurately, suggests a spark of genius
.
This discovery has poignancy for us as our grandfather, John Mitchell, (founder of the family firm in 1931) was an early specialist dealer in the work of Robert Salmon when living in New York in the 1940s.

John Wilmerding, Robert Salmon Painter of Ship and Shore, published by the Peabody Museum of Salem and the Boston Public Library, 1971. No. 879, p. 96