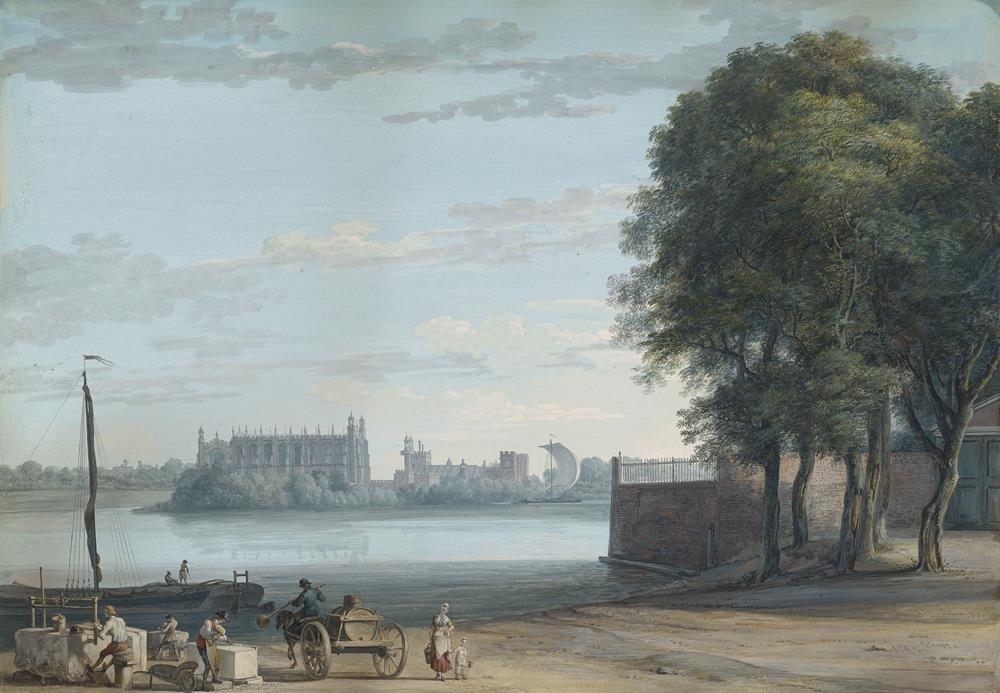 
January 2017
gouache and watercolour over graphite on thick cream paper, laid down on card
15⅛ x 21½ in. (382 x 546 mm.)
Inscribed on the verso of the mount: This and three other views of /Windsor were clean’d, and repar’d for Sr. Wlm. Parsons in the year - 1813 by /his friend. Jno. Milward of Artillery Place/ Finsbury Square

This remarkable bodycolour painting belongs to a large group of views in and around Windsor produced by Paul Sandby in the 1760s and 1770s, and indeed at one time belonged to a set of four views owned by Sir William Parsons in 1813. Upon his return from Scotland in the late 1740s, Sandby spent much of his time sketching at Windsor, where his brother Thomas’s employer, the Duke of Cumberland, was Ranger of the Great Park from 1746 onwards, and it is no exaggeration to say that views of Windsor became a mainstay of Sandby’s exhibited works, proving popular with critics.
Sandby captures this view across the south bank of the River Thames from Crown Corner, Windsor. On the river a barge sails past Eton, and in the foreground a mother and child walk up the bank while three stonemasons cut and chisel stone. The mason on the far left, seated at one end of a huge block of stone, also appears in Sandby’s drawing of Windsor, East view from Crown Corner, at the British Museum (accession no 1878,0713.1280). Perhaps the best known version of this vista of Eton from across the River Thames is at the Laing Art Gallery, Newcastle, Niveson loan (gouache, 21⅛ x 30½in., c. 1790) and exhibited in The Great Age of British Watercolours 1750-1880, January-July 1993, London, R.A., and Washington, National Gallery of Art, no. 256, col. pl. 51. A third version (watercolour, 12¼x 19¼ in., signed and dated 1779) was recently with Andrew Clayton-Payne, London (see Literature).
The Sotheby’s catalogue entry from the 1962 sale suggests the present work is dated 1768 on the reverse and the Leggatts invoice issued a week after the auction (see Provenance) describes it as ‘signed and dated 1760 on the reverse’. However, we have been unable to find any evidence of these; indeed it seems unlikely to be the case, as we know from the inscription that the drawing was re-mounted three years after the artist’s death and that therefore any ‘signature’ or date would inevitably not have been in Sandby’s own hand.