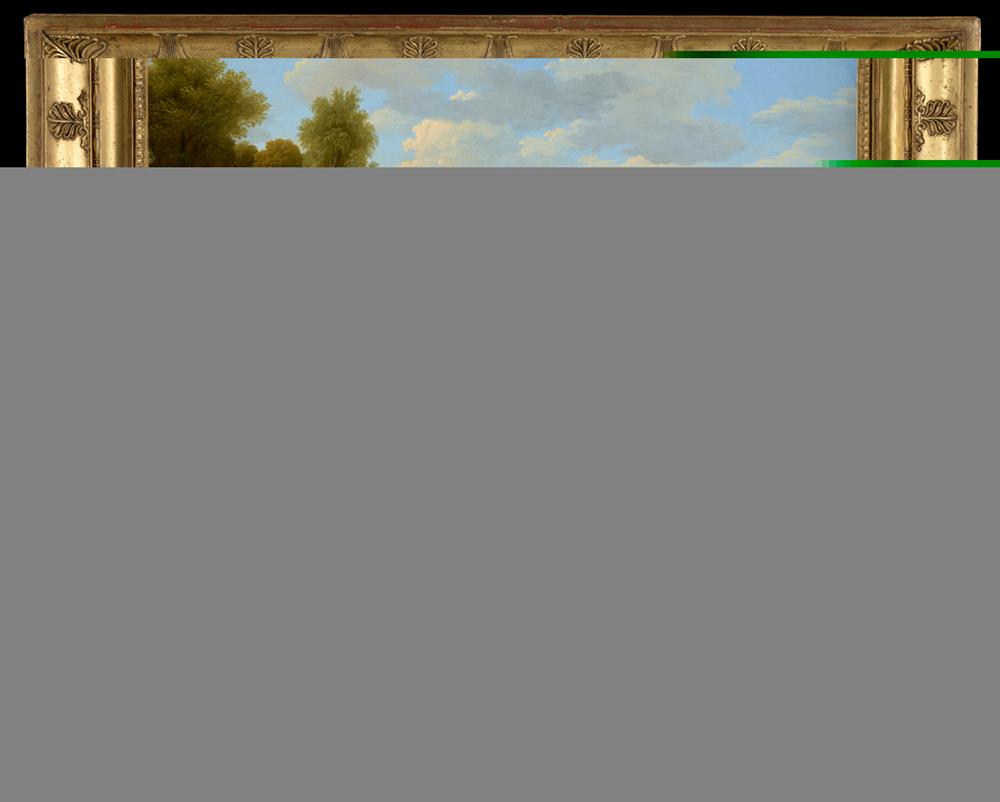 This hitherto unpublished landscape by Jean-Victor Bertin depicts a classical fantasy or capriccio. Within a carefully constructed composition we see two men in classical dress, one on a horse, the other leading the reluctant animal towards the river. To the left resting on a bank under the shade of some trees a shepherd reclines, his flock nearby. To the right a fisherman moors his boat to a post on the riverbank. In the distance two figures walk together along the valley, while others seek comfort in the shade, or mount the steps to the hilltop village beyond.

The tradition of the classical landscape was begun in Rome in the mid-seventeenth century by the French-born artists Nicolas Poussin (1594-1665) and Claude Lorraine (c.1604-1682), who sought to elevate the status of their paintings by endowing the Roman campagna with narrative references from the biblical or classical past, and imposed an idealized vision of balance and harmony on the world before them. Despite the dominance of the rococo style in the first half of the 18th century, the old cult of antiquity and classicism was revived from 1748 onwards with the rediscovery and subsequent excavations of Herculaneum and Pompeii. By 1800 the painter Pierre Henri de Valenciennes (1750-1819) was the dominant force championing the neoclassical landscape, and in 1816 succeeded in establishing a Prix de Rome honouring “historical landscape” painting. Valenciennes’ theoretical and practical discourse on the subject, Elémens de perspective pratique à l’usage des artistes (1799–1800), remained the most influential treatise on landscape painting for decades.

Of his many pupils, Jean-Victor Bertin is certainly one of the most accomplished. Born in Paris in 1767, he entered the Académie Royale de Peinture as a pupil of the history painter Gabriel-François Doyen. By 1788 he had become a pupil of Valenciennes who directed him towards idealized Italianate landscape. His official début came in 1793 when he exhibited in the ‘open’ Salon. After 1793 he contributed consistently to the Salon until his death. At the Restoration, Bertin was fortunate in being commissioned to join the group of artists working on the redecorations of the Grand Trianon and the Galerie de Diane at Fontainebleau, begun in 1819. He constructed his paintings predominantly according to Poussin’s principles of idyllic landscape and drew on stock compositional devices from the master’s repertory. The results are distinguished by a marked correctness and balance in design, severe draughtsmanship and harmonious colour. Between 1810 and 1830 he produced his most successful compositions, which use the motif of a path or river presented within an elongated horizontal schema, combining ingenious spatial construction with delicate lateral lighting.

Like his master, Valenciennes, and his contemporary Lancelot-Théodore Turpin de Crissé, Bertin perpetuated the classicizing formulae of the 17th century while introducing more direct observation from life, as is seen in the charming detail of the dog paddling in the river or the unsettled horse that breaks the afternoon’s calm. The increased interest in atmosphere and direct observation would continue in Bertin’s pupils such as Corot, the direct precursor of Impressionism who, together with Achille Michallon, Camille-Joseph-Etienne Roqueplan and Jules Coignet, showed Bertin to have been one of the most influential teachers of the next generation of landscape painters.

The composition of the painting corresponds to several known works by Bertin. One version with minor variations was exhibited in Hazlitt, Gooden & Fox’s 1979 exhibition The Lure of Rome (plate 6), another was included in Matthiessen Gallery’s 1999 exhibition An Eye on Nature: The Gallic Prospect, French Landscape Painting 1785-1900. The Metropolitan Museum of Art, New York, holds an unfinished version of the same composition (2003.42.2) which was gifted by Wheelock Whitney.

Special mention of the exceptional condition of the picture must be made. The painting has had the fortune to have suffered no previous restoration campaigns, and as such remains unlined and in its original frame. The removal of old discoloured varnish has revealed a perfectly preserved paint-surface, and the verdant tones of the Roman countryside are as fresh for us to enjoy today as when the artist painted them almost 200 year ago.