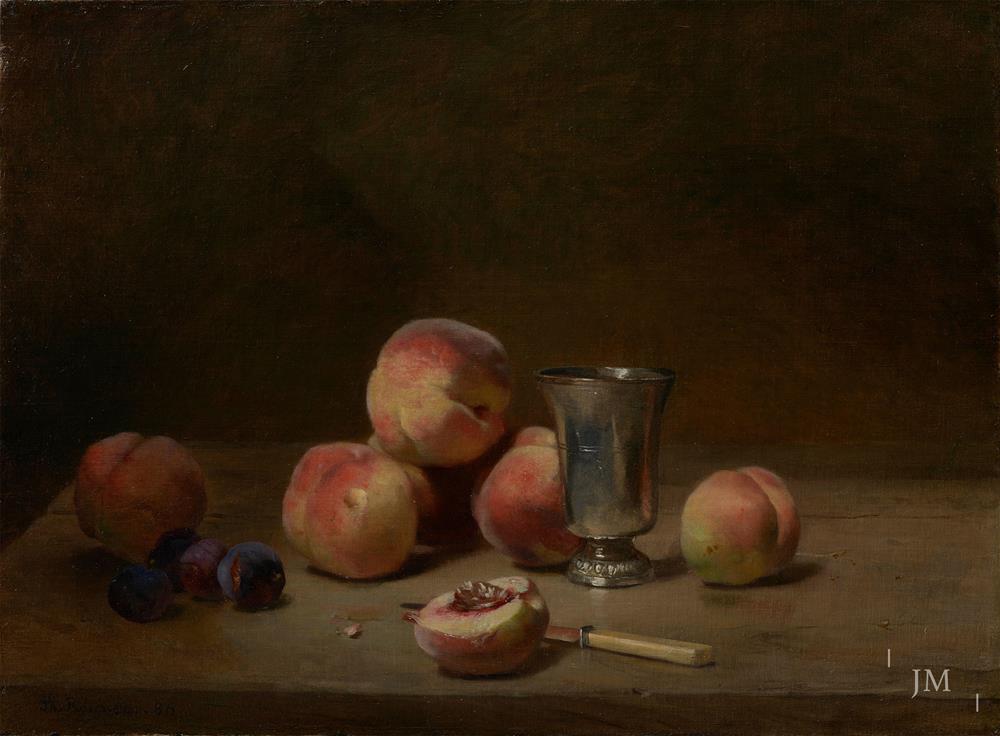 Philippe Rousseau has often been overshadowed by other nineteenth-century French painters called Rousseau, notably the Barbizon artist, Theodore, and the famous ‘naïve’ painter, Henri ‘le Douanier’ Rousseau. Yet, from the mid-1840s to his death in 1887, Philippe Rousseau was one of the leading exponents of animal and still-life painting.
Rousseau made a precocious debut at the Salon in 1834, at the age of eighteen, with a Normandy landscape. He continued in this vein (and also tried portraits) without success. Then, in 1844, he showed three still lifes and, the following year his Le Rat de Ville et Le Rat des Champs was a public success. In 1850, Le Rat retiré du monde (Lyon, Musee de Beaux-Arts) was bought by the state for the Palais du Luxembourg, then the museum for contemporary art. At the Exposition Universelle of 1855, he met with further success and was enthusiastically supported by Théophile Gautier. Baron Rothschild commissioned paintings and Princess Mathilde joined the growing list of patrons.
Rousseau’s success is inseparable from the movement now called by art historians the ‘Chardin Revival’. The French Revolution swept away the ancien regime so thoroughly that it was almost subversive to admire the great French artists of the eighteenth century, Jean-Simeon Chardin (1699-1779) included. However, critics such as Theodore Thoré, the champion of Vermeer and realism, successfully campaigned against the oblivion of Chardin. By 1852, the Louvre had acquired three examples and added gradually to their holding after that. In 1860, Philippe Burty organised an exhibition at the Martinet Gallery in Paris of forty Chardins. Bonvin helped obtain Chardins for the enthusiasts, such as Marcille and indeed Rousseau himself, who acquired two.
This painting, made the year before he died, shows Rousseau’s mature understanding and debt to the great eighteenth-century master. Gone are the opulent and decorative displays of his earlier works, instead the palette and composition have been refined to a masterful play of contrasts; the velvety skins of the peaches against the polished silver of the goblet, the over ripe figs opposite the freshly cut fruit, and the knife, that invites the spectator to participate in this still and silent world. Chardin’s accomplishment was to ‘marry object and atmosphere in an intimate union which makes the space of his pictures a private place, ultimately serene and inaccessible”1 and there is little doubt, looking at this painting, that Rousseau, at the end of his long career, saw the achievements of the master he most admired fully realised in his own work.
JAB