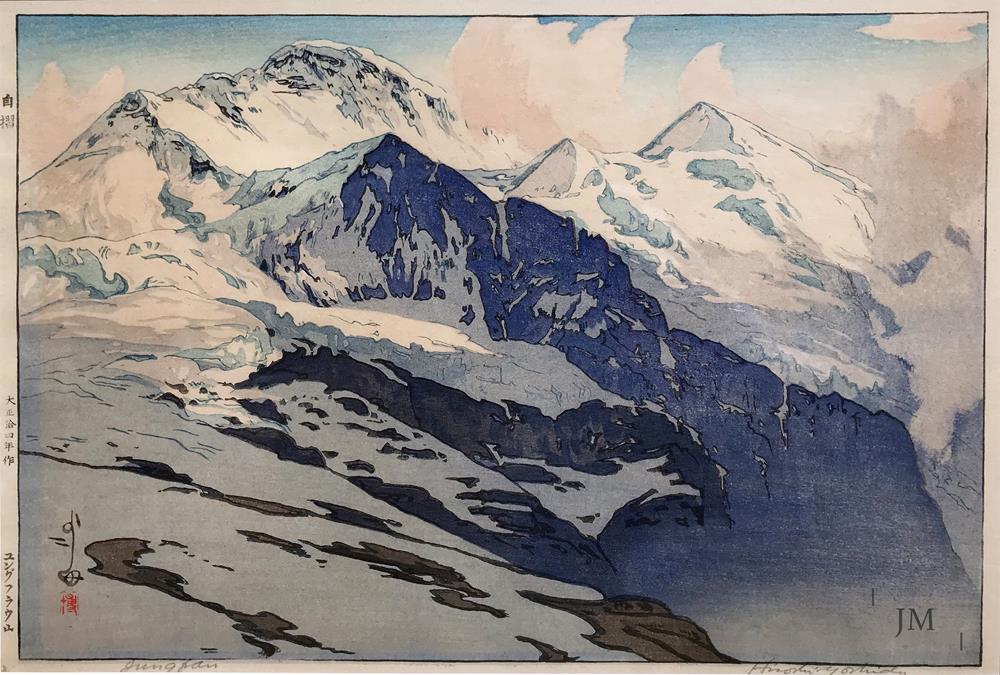 Hiroshi Yoshida’s much-admired prints of European and American landscapes maintain an allegiance to traditional Japanese woodblock techniques and traditions. Born in 1876, he trained in Kyoto and Tokyo as a painter with an extensive knowledge of Western-style painting. Following the Great Kanto Earthquake of 1923, Yoshida embarked on a tour of the United States and Europe, painting and selling his work. Despite considerable success as an oil painter and watercolorist, Yoshida turned to woodblock printmaking upon learning of the Western world’s infatuation with ukiyo-e prints. Returning to Japan in 1925, he started his own workshop, specializing in landscapes inspired both by his native country and his travels abroad which included this print of the Jungfrau. Yoshida often worked through the entire process himself: designing the print, carving his own blocks, and printing his work; processes that had traditionally been divided into separate disciplines. All of the prints produced in his lifetime are signed “Hiroshi Yoshida” in pencil and marked with a jizuri (self-printed) seal outside of the margin. Within the image, the print is also signed “Yoshida” with brush and ink beside a red Hiroshi seal. Yoshida was an avid alpinist, with mountains and water figuring prominently in his works. He later established the Japan Alpine Artist Association.