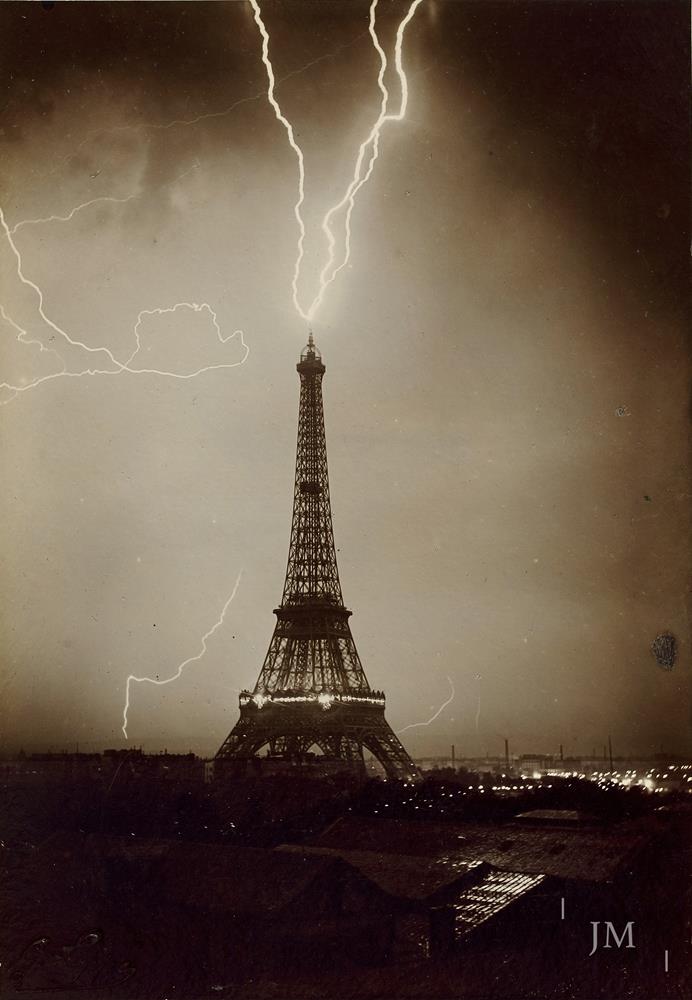 Like so many of his contemporaries, Gabriel Loppé was first and foremost a painter who became mildly obsessed with photography from the start. He took it up in the 1850s briefly and then returned to it in the 1890s. He took hundreds of photographs and became one of the first ever practitioners to make ‘nocturnes’. Loppé never sold any of his photographs but whether he had intended to or not, Loppé became as individual a photographer as he was an artiste peintre. His nocturnes represent the most avant-garde aspect of his work with a camera but, ironically, they were the most ‘amateurish’ pictures he took. Living so near to the Tour Eiffel, it was inevitable that Loppé, as one of its keenest advocates, would photograph it at night too.

On the evening of 3rd June1902, Gabriel Loppé was setting up his camera on the balcony of his apartment when a summer storm began to rage over Paris. Just across the river, bolts of lightning began to cascade down M. Eiffel’s gigantic, latticed tower. At twenty past nine Loppé took this sublime picture. The Tour Eiffel foudroyée photograph, measuring only 17 x 12 cm, may have indelibly linked Loppé’s name to the history of photography, but it remains one of the most vivid reminders of who he was and what he represented: a man of his time.
Exposing the glass plate for twenty-two minutes, he managed to capture something he had been chasing, on and off, for several years: a multiple lightning strike on the Tour Eiffel. Loppé had not met Gustave Eiffel but an acquaintance of his sent the photograph on his behalf.

On 23rd October, Loppé received the following letter from Eiffel:
‘Sir, Mr. Milan sent me the fine photograph of the Tower taken during a storm on June 3rd, 1902. I cannot imagine anything so perfectly outstanding as this and thank you wholeheartedly for making sure that I was sent it. I would simply like to know if the three bolts of lightning hitting the tip were taken in one go or resulted from a series of strikes exposed over a certain period. I am therefore intrigued to receive more details of how you did this and thank you in advance for whatever you can tell me. Yours most faithfully, G. Eiffel.’

After a lifetime of studying meteorological effets in his landscapes; becoming adept at capturing the colours of dawn and sunset; painting clouds in all their shapes and sizes; mist and fog and mastering so many types of snow; it seems ironic that this one, cosmique photograph would, over time, eclipse nearly everything else Loppé had achieved.