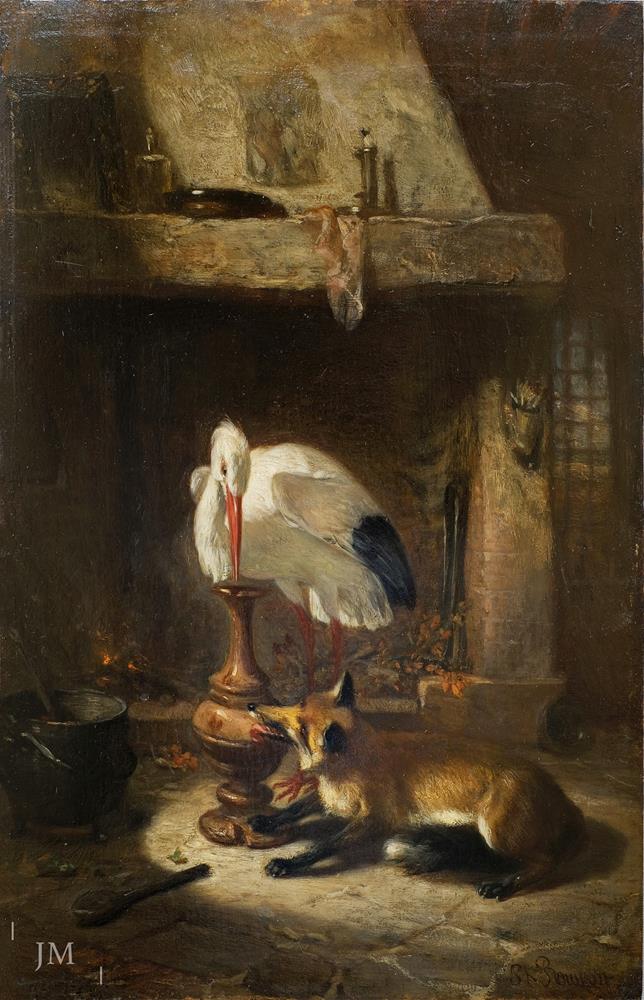 ‘But now the dame, to torture him, Such wit was in her, Served up her dinner
In vases made so tall and slim, They let their owner’s beak pass in and out,
But not, by any means, the fox’s snout! All arts without avail,
With drooping head and tail, As ought a fox a fowl had cheated,
The hungry guest at last retreated, You knaves, for you is this recital,
You’ll often meet Dame Stork’s requital.’

The Fox and the Stork is the third vulpine ‘fable’ painting by Philippe Rousseau to have featured in Gallery Notes, the others being The Fox and the Grapes and The Fox and the Raven. The similar dimensions of the panels would suggest that Rousseau worked on a ‘fox’ series. In this instance, the theme follows the maxim: ‘Do to others what one would wish for oneself.’
From the mid-1840s to his death in 1887, Philippe Rousseau was one of the leading peintres animaliers of his time. As well as specialising in pure still life paintings, by introducing animals into anecdotal scenes, Rousseau secured a name for himself in nineteenth century French painting. Although he has often been overshadowed by his namesakes, the Barbizon artist Theodore, and the ‘naïve’ painter, Henri ‘le Douanier’, his success is inseparable from the movement now called by art historians the ‘Chardin Revival’[1]. The French Revolution swept away the ancien regime so thoroughly that it was almost subversive to admire the great French artists of the eighteenth century, Jean-Simeon Chardin (1699-1779) included. Nonetheless, critics such as Theodore Thoré, the champion of Vermeer and realism, successfully campaigned against the oblivion of Chardin and by 1852, the Louvre had acquired three examples and added gradually to their holding after that.

Rousseau based many of his paintings and watercolours on the Fables of Jean de la Fontaine (1621-1695). Since the first six books appeared in 1668 the Fables were a great success both in France and abroad. Further collections appeared in 1678-9 and in 1693. The earlier books adhered closely to the classical tradition of fables, beginning with Aesop and the Roman writer, Phaedrus, and offer countless opportunities for combining the two subjects at which Rousseau excelled – still life and animal scenes. In 1845 Rousseau began exhibiting his Fables at the Salon in Paris with Le Rat de ville et le Rat des Champs and in 1852 his version of Le Rat qui s’est retiré du monde (Lyon, Musée des Beaux-Arts) won him the Légion d’Honneur and considerable public acclaim.