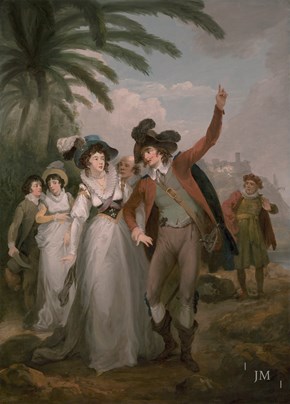 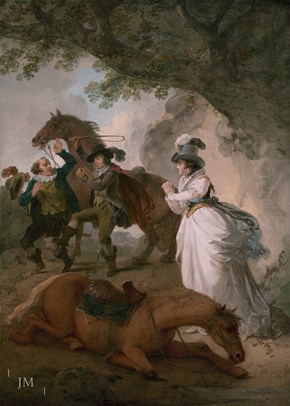 Engraved in 1794 by A. Smith and I. Taylor for John Boydell’s Shakespeare Gallery.

Exhibited:
Birmingham, City Museum and Art Gallery, 1934, Commemorative Exhibition of the Art Treasures of the Midlands, no. 304 (as 'The Elopment' by William Hamilton).

Literature:
John Boydell and Josiah Boydell, A Collection of Prints from pictures painted for the purposes of illustrating the dramatic works of Shakespeare by the artists of Great Britain, London 1803, Vol III;
R.M.Clay, Julius Caesar Ibbetson (Country Life 1948), p. 55 & note 5, p. 56;
E. Waterhouse, The Dictionary of BRITISH 18th CENTURY PAINTERS in oils and crayons (Antique Collectors’ Club 1981), one illustrated on p. 192 (as ‘Unlocated’).

Our Gallery Notes of November 2017 commemorated the bicentenary of Ibbetson’s death and in it I wrote how, since our exhibition of 1999 and my accompanying monograph on the artist, we have been often and agreeably surprised by the re-emergence of fine pictures by him which were thought lost or destroyed.  It is rather fitting, then, that on the twentieth anniversary of my book we are able to present what are manifestly the most significant of them all, the original oil paintings commissioned from Ibbetson by John Boydell for his Gallery illustrating the plays of William Shakespeare. Until now only known from the engravings derived from them, and last recorded at an exhibition in 1934 (and then not even as the work of Ibbetson), these large figure paintings are without parallel in Ibbetson’s work. Furthermore, fewer than a third of the Boydell oils are recorded today, in institutions as diverse as the Folger Library, the Tate, the Royal Shakespeare Company and Petworth House, and it seems likely that these are the first to appear on the art market in nearly half a century: a welcome development, therefore, for enthusiasts of Ibbetson, an unjustly overlooked exponent of British art in its richest period.

Having served an apprenticeship as an engraver, John Boydell (1720-1784) became a highly successful printseller, and in the 1760s and 1770s published some of the most impressive paintings of the period, including Joseph Wright of Derby’s Experiment with an Air Pump (1769) and Joshua Reynolds’ Ugolino (1774). In 1775 he set his team of engravers to work on the collection at Houghton Hall before it was sold to Catherine the Great, and he also issued fine mezzotints of Rembrandt paintings. With a commercial eye on the foreign market for prints, especially in Paris, Boydell’s speculative judgement was often spectacularly rewarded, as for example when he ended up owning all of the rights to the engraved plate of Benjamin West’s celebrated Death of Wolfe (1775). In 1784 he bought directly from John Singleton Copley for £800 his The Death of Major Peirson, and two years later acquired all Hogarth’s plates.

Echoing the strictures of Sir Joshua Reynolds, Boydell had long lamented the lack of a school of history painting in England, then thought to be the highest form of art with its morally instructive messages, and he was convinced that all that was required was patronage and the right subject matter. (It should be remembered, of course, that the term ‘history painting’ meant grand and heroic stories from the past, and these could come from myth and legend just as much as from actual historical events.) In recent decades revisionist art historians have homed in on ‘the articulation of British national identity in this period’, the ‘mounting degree of conflict’ and colonial expansion, all of which are - in their favourite term - ‘problematic’. What is certain is that as the nation prospered at home and prevailed overseas, Georgians more and more felt a sense of uninterrupted connection with Britain’s ancient and mostly mysterious past, with its cultural traditions and in particular with the nation’s literary heritage.  At a time of increasingly sophisticated political debate and growing social dissonance, the one national subject on which there could be no difference of opinion was Shakespeare, and it is no coincidence that in the second half of the eighteenth century, beginning with the achievement of David Garrick, The Bard became the subject of a growing cult. It is no surprise, therefore, that Boydell leapt at the idea put to him at a dinner in Hampstead in November 1786 of a Shakespearean ‘gallery’. Into the venture he put the colossal sum of £350,000 of his own money, and the intention was to commission two series of oil paintings of scenes from the plays, and to publish engravings of them which could be sold as souvenirs to visitors to the permanent exhibition of the paintings in a dedicated gallery in Pall Mall, either singly or as a complete, luxurious edition of the plays. In June 1789 the exhibition opened with thirty-four pictures, with a further thirty-three added the following year and by the time Ibbetson’s pair entered the collection in about 1794, there may have been as many as one hundred and seventy oils in total. Even though many of the leading artists of the day including Reynolds, Fuseli and Romney all contributed, the scheme was prey to the vagaries of the market, not least the outbreak of the wars with revolutionary France, and the unfavourable reaction to the quality of the engravings themselves, in the production of which Boydell had been forced to make economies. The ‘Gallery’ closed, and the paintings were sold off in a three-day sale at Christie’s in 1805 (see Provenance above).

History has not been kind to the reputation of Boydell’s Shakespeare enterprise, but for an artist of unsteady circumstances like Ibbetson the commission would have been welcome, given that for him work was never constant and that his wife would die towards the end of 1794, leaving him with three young children. Having completed his decorative cycle for Lady Mansfield at Kenwood the previous year, he had embarked upon his series of seventy-four original illustrations for John Church’s Cabinet of Quadrupeds which would not be published until 1800, and so Ibbetson must have been more familiar with engraving and book publishing than one tends to think.

One of the Taming of the Shrew pendants is from Act. IV, Scene 1, the one with the fallen horse; Katherine entreats Petruchio, who is admonishing Grumio with his riding crop; the other comes from Scene 5, and shows the argument on the road about the sun, with Petruchio, Katherine and Hortensio walking in a landscape, the Umbrian hills and a campanile in the background. Ibbetson’s renditions appear to be very much in keeping with the other known paintings for Boydell’s ‘Gallery’ and are particularly close to those of Francis Wheatley (1747-1801). Wheatley, whose art sometimes brings to mind that of Ibbetson anyway, produced thirteen pictures for the ‘Gallery’, and it is worth noting that the smaller ones were of exactly the same dimensions as ours, distinctive for being not quite the regulation 30 x 25 inch standard size of the time. The composition, expression and colouring are tasteful, and yet Ibbetson knows enough theatre to pose his figures dramatically, and although there is marked characterization in Petruchio threatening his servant, Ibbetson generally uses gesticulation rather than expression to indicate action, and in this he was not alone.

Although done with the engraver’s task in mind, the present pair of scenes are fluid and painterly, and yet at the same time not in any way ‘sketchy’. Above all they show how gifted a figure painter he could be, but only in a few full-length portraits did Ibbetson ever attempt figure painting on this scale and of this clarity. In no other oils of this size that I know of did he attempt ‘conversation pieces’ comparable to these and yet, again, one inevitably wonders how differently he might be seen today if he had explored this vein of his art further. It is telling that in his survey of eighteenth-century British painting, Ellis Waterhouse (see Literature above) chose to illustrate one of our paintings, when really they are very much the exception in the oeuvre of a painter known for his romantic views of Wales and the Lake District. Our appreciation of his skill is, needless to say, greatly enhanced by the excellent condition and lack of discolouration to be found in this particular pair of canvases.