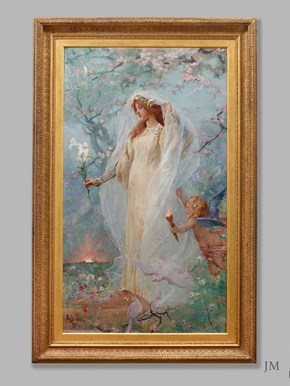 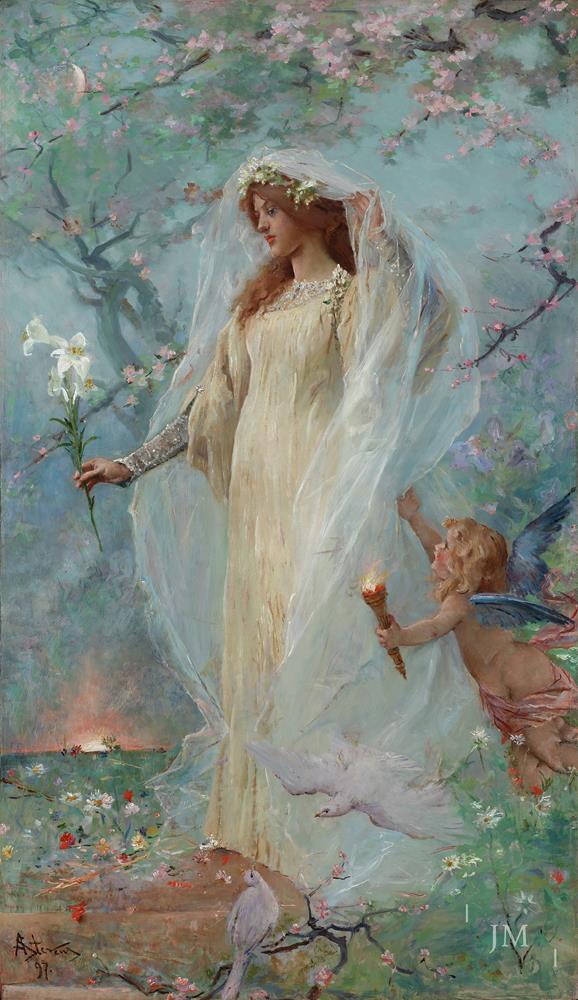 In 1895 the annual exhibition of the Société national des Beaux-Arts, held at the Palais du Champ-de-Mars in Paris from April to the end of June, included seven paintings by Stevens. By this time he had returned to his native Brussels, in ill-health, suffering from depression aggravated by the loss of his wife and brother a few years earlier and bitter at the decline in his success, both material and critical – and at the success of his Impressionist friends, whose art he now denounced publicly. Even though now in his seventies, he felt emboldened to apply for the post of director of the Academie des Beaux-Arts de Bruxelles, which had become vacant through the death of his old friend, Jean-François Portaels. In August it fell to the Bourgmestre Charles Buls to tell Stevens that his application had not been successful; as compensation, however, Buls commissioned from him a decorative painting for the civil registry office in the Hôtel de Ville, Brussels. That painting, untraced for more than sixty years, is the one displayed here.

Stevens did not complete the painting until he was back at his home in Paris in the autumn of 1897, and the very fact that any painting now took him this long to complete attests to Stevens’s general decline. Nonetheless, the finished picture is astonishing in its accomplishment, in the general handling of the figures, in the detailed modelling of the faces and the hands, and the whole conception, which is quite unprecedented in the context of his prodigious output over forty years. The subject is intended to be an allegory of marriage, and in particular, the aura surrounding a new bride, in this case attended by Cupid. The word ‘hymenée’ in the picture’s French title has caused some confusion since although he is associated with marriage, the Ancient Greek god Hymen was male. In French the word ‘hymenée’ can be used as an adjective to mean ‘joined’ or, more literally here, ‘wedded’. Much remains to be discovered about this late flowering from Stevens, but it is a revelation to our firm who have been dealing in the artist’s work for more than half a century.