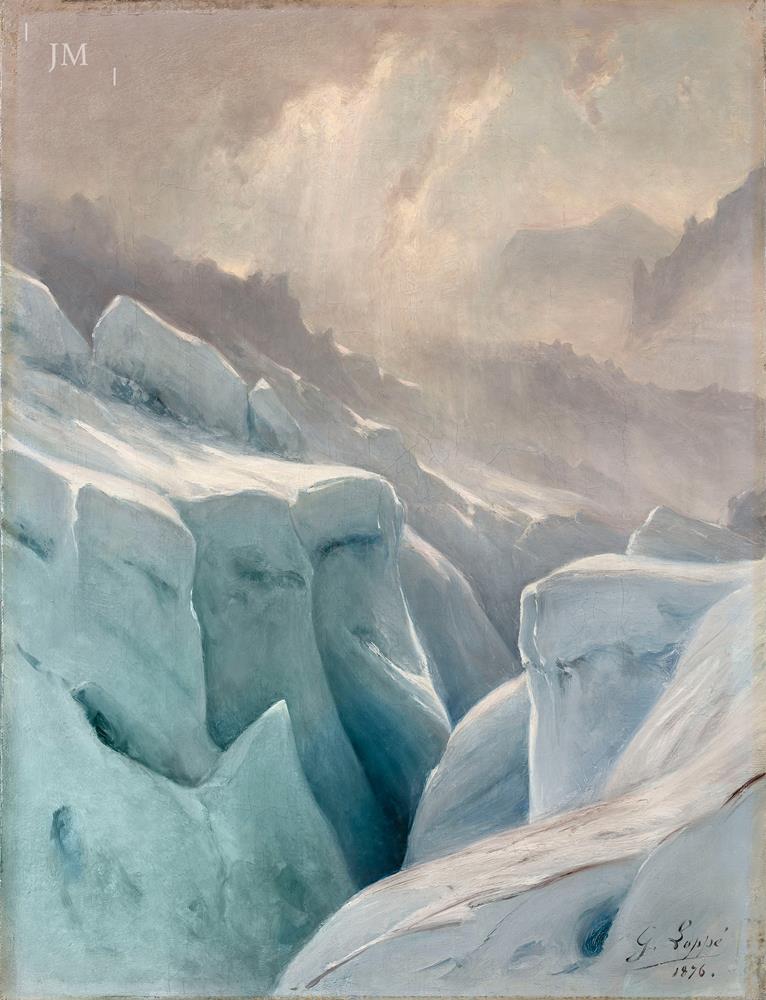 The mid-1870s were some of Loppé’s busiest years. He divided his time between London in the winter where he planned his exhibitions and from June to September he would install himself and his family in Chamonix. Weather permitting, he either painted or climbed-or both- every day.

On March 3rd 1876, the year that Crevasses on the Glacier du Géant was painted, Loppé had made the second known winter ascent of Mont Blanc having been thwarted by the cold and wind back in January. One can only imagine how different the conditions were a few months later as he sat in front of this crevasse working away on his three-legged, folding stool with his paint box on his knees. This recent acquisition is a pristine example of how Loppé combined his love of painting on the spot – from the motif- with his enthusiasm for the inner workings of glaciers. The foreground in this painting was re-worked into the monumental four-metre-high canvas of 1888 entitled Crevasses et séracs sur le glacier du Géant which belongs to the Amis du vieux Chamonix but since the 1999 fire now hangs rather forlornly in one of the town’s former grand hotels, Le Majestic.

When writing about his climbing expeditions, it was clear that Loppé had a prodigious memory for places. In his emotive words, he referred to scenes that offered a ‘reality that was more beautiful than in our wildest dreams’ and reality was just what he strived for. Apart from his skill at conveying atmosphere, the other remarkable aspect of Loppé’s haute montagne paintings is their topographical accuracy. Given how many of his pictures were made directly from nature without ever resorting to artistic licence, whether on a summit or beside a crevasse, Loppé never once exaggerated nor diminished any of his compositions to create a more ‘successful’ painting. He was often challenged on that very point by visitors to his exhibitions but always politely but firmly rebutted the suggestion with accurate and compelling evidence. When Loppé exhibited three drawings and two oil studies at Dijon’s Beaux-arts exhibition back in 1849, all of them were catalogued as having been painted or drawn directly from nature. At nearly every future exhibition throughout his career, Loppé would regularly annotate how many of his works had been done on the spot. Most of the time, it was nearly all of them.