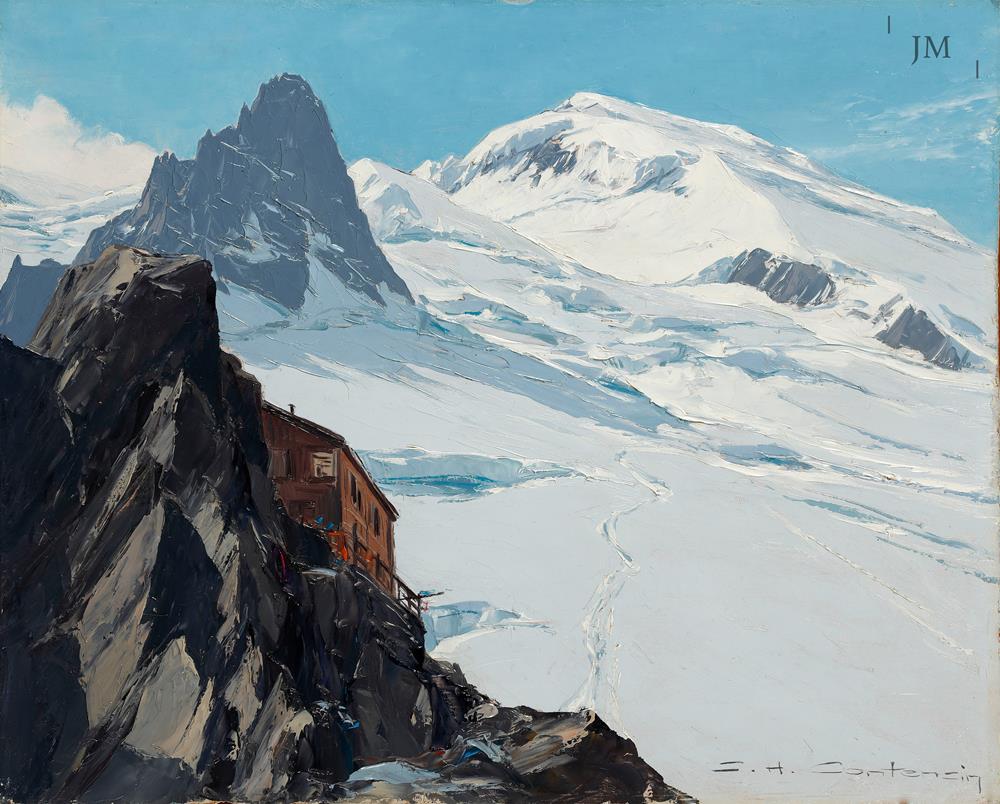 Having survived the First World War when only 17 years old, Contencin trained as an architect and draughtsman and from an early age began to paint and climb in the Savoie and Bernese Oberland. Initially he was employed by the French railways where he ended up commissioning works of art for their respective companies. Although he was technically an amateur painter, he was an active member of the Paris based Société des Peintres de Montagne and his paintings were frequently displayed in regional and national exhibitions. Towards the end of his life he was the President of the Société.

The Grands Mulets Refuge has an illustrious history. Perched in a spectacularly haute-montagne environment atop the pyramidical Rocher des Grands Mulets at 3,051 metres, the hut is located at the junction of the two Bossons glaciers coming down Mont Blanc’s north flank. The first cabin was constructed in 1853 and, incidentally, much frequented by Gabriel Loppé and his companions. The rudimentary wooden shelter was replaced in 1896 by a larger hut with a balcony which lasted until 1960 when a modern building was inaugurated, capable of sleeping 70 people.

The voie des Grands Mulets, or the route historique was the original way to the summit, first completed by Balmat and Paccard in 1786, and remained the only recognized route until the Goûter Ridge, voie Royale, was first climbed in the 1860s. The summit, which is visible here in the upper right, above and beyond the long snow trail, is gained by traversing the wide plateau before ascending the often heavily crevassed north face to gain the ridge. The forbidding flake of rock to the left of the path across the glacier is the Rocher Pitschner.