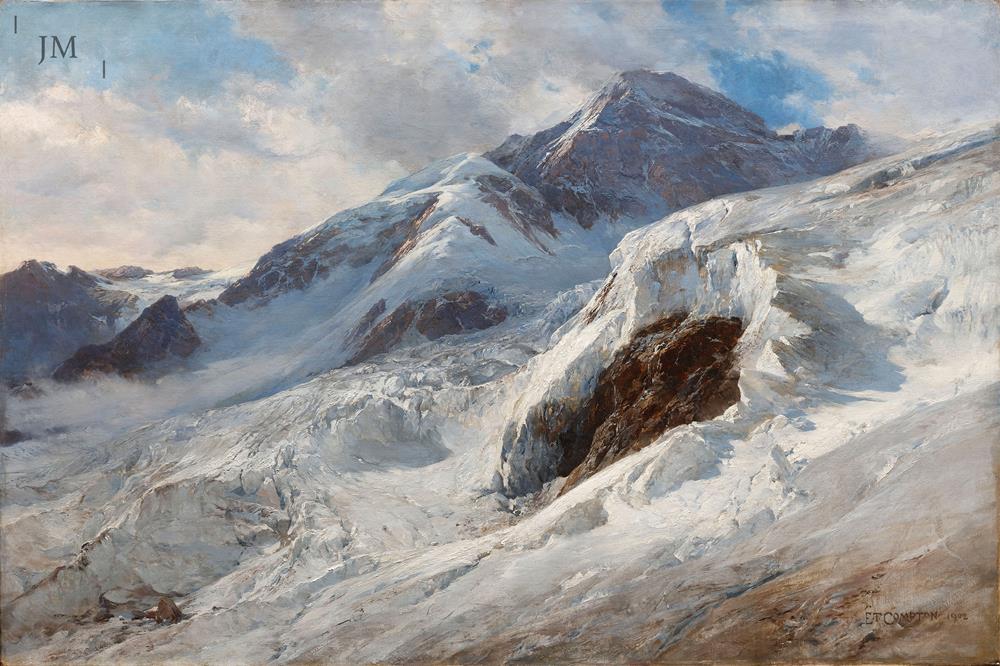 Opportunities to acquire paintings by Compton of such quality and size as this have become increasingly scarce. This hitherto unrecorded picture has a monumental feel to it and is thus significant on several levels, not least as a record of a landscape that has now dramatically altered.

Compton took his viewpoint on the Italian side of the Monte Rosa Massif. With the mighty Lyskamm (4,527 metres) dominating the skyline, the artist was facing west from the Gnifetti Hut. The Lyskamm is a treacherous mountain with an array of tragedies to its name. Its grisly moniker in German, Menschenfresser (‘man-eater’), derives from its reputation for dangerous cornices prone to avalanche down its north face. The distinctive ‘snout’ of its Italian ridge, seen in the middle left of the composition is known as the Naso del Lyskamm and is considered a decent climb in its own right.

More than a century after Compton painted this highaltitude arena of rock and ice, the glaciers have diminished drastically in both volume and reach. As a result of the record-breaking summer temperatures over the last two decades, the ‘Nose’ has lost most of its cover. Equally, the basin of the Lys glacier seen in the foreground has now gone and nor was Compton, like Loppé, his only other rival as a leading peintre-alpiniste, ever known to embellish any of his mountainscapes. As a chronicler of more peaks in the Alps than any other painter, both then and now, Compton recorded as faithfully as possible what he saw in pencil, watercolour and paint.

Although Compton was born in London, the artisticallytalented family emigrated to Germany when Edward was still a student and he remained there for the rest of his life. He began his apprenticeship as an illustrator and painter in the Hessen region.

He first set eyes on the higher Alps during a family boat trip on the Thunersee when the sky cleared up beyond Interlaken unveiling the triumvirate of the Eiger, Mönch and Jungfrau. Compton maintained how that episode alone convinced him to become a specialist painter of mountains.

A skilled alpinist, Compton climbed more than three hundred peaks in his lifetime, of which twenty-seven were first ascents. He was a member of the AustroGerman Alpine Club, the Swiss Alpine Club and the Alpine Club in London where he also exhibited his oil paintings and watercolours, a medium in which he excelled.

In 1872 he settled with his family in Bavaria, near the Starnberger See, and until the interruption of 1914, climbed and painted in Germany, Switzerland, France and in Italy. Although he knew the Alps well, some of his favourite subject matter was to be found in the Dolomites, the Tyrol and to a lesser extent, the Bernese Oberland. However, between 1904 and 1908 Compton spent a lot of time working in Zermatt from where he was able to explore the wider reaches of the Valais Alps.