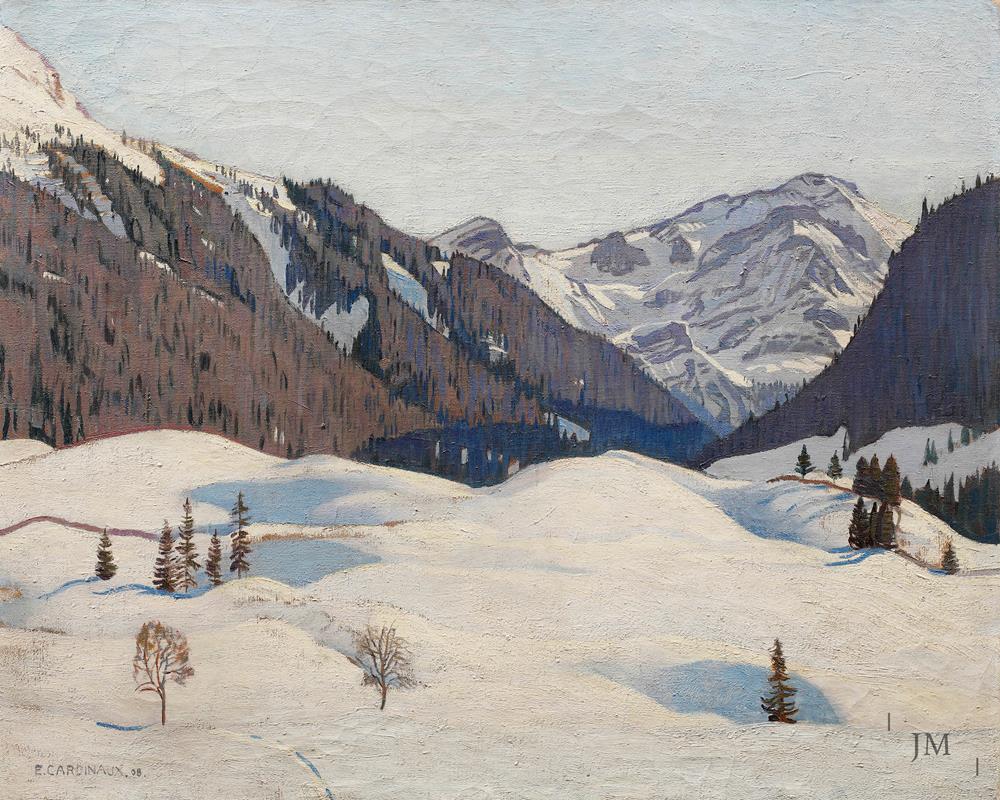 There are several Breithorn mountains recorded in the German-speaking Alps of which the three most significant are the one above Zermatt, the highest at 4,164 metres, the Lauterbrunnen Breithorn that dominates the south end of the eponymous valley and the Lötschental peak. Meaning ‘Broad Horn’, the Breithorn seen in Emil Cardinaux’s tranquil view from the valley near Fafleralp is situated in one of Switzerland’s most beautiful and still relatively unspoilt valleys.

Cardinaux grew up in Bern and in 1898 spent two years at the München Kunstakademie where he became a pupil of the German painter and sculptor, Franz von Stuck, the founder of the artistic movement known as the Munich Secession back in 1892. Between 1905 and 1920, Cardinaux worked in many mediums and as well as oil paintings produced a large body of work including lithographed posters, book illustrations, paintings on glass, decorative murals for both civic and private commissions.

Like Burger and Schlatter, Cardinaux is better known today as a graphic artist and, famously as the designer in 1920 of the iconic Matterhorn logo for the Swiss chocolatier, Toblerone. There are over 130 lithographed Plakaten known by him and many of them are sought after by dedicated poster collectors who are often prepared to pay more than £20,000 for the rarest examples. Cardinaux’s posters are therefore synonymous with the elegant or vintage appeal of Davos, St. Moritz and the lure of the famous Rhätische Bahn railway. His lithograph style was characterized by bright colours and simple, clear forms which championed traditional landscape motifs. More than any aspect of his work, his posters became the prototype for an ideal picture of Switzerland and asserted the notions of Swiss independence and idiosyncrasy.