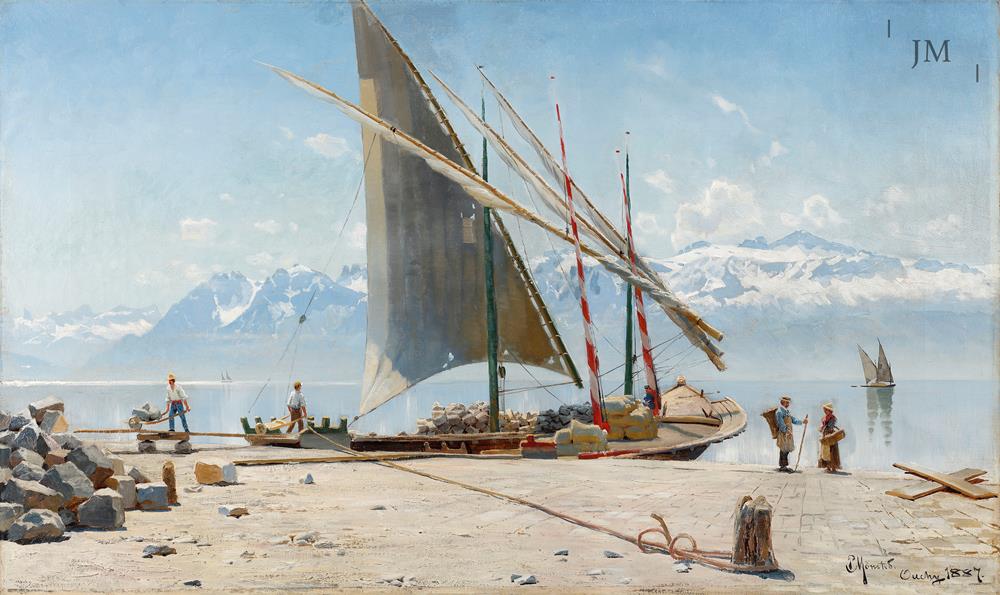 Last seen in public in a ground-breaking exhibition held in Lugano and Geneva in the early 1990s, Unloading stone from a barge at Ouchy, Lake Geneva, is an original and striking representation of one of Switzerland’s most famous features. With its glowing colours and an Impressionist’s sensitivity to light, this beautiful composition of a quayside on Lake Geneva is an early masterpiece by one of Denmark’s leading landscapists, Peder Mønsted. From the generation that followed the Danish ‘Golden Age’ of painters such as C.W.Eckersberg, Christen Købke and Martinus Rørbye, Peder Mønsted studied in Copenhagen under the painter Andreas Fritz. As well as absorbing the Danish artistic tradition he was also well-aware of the plein-air tendencies in France which he was quick to incorporate into his craft. Although later in his career Mønsted specialized in snow scenes and light falling into woodland glades, his paintings produced on the shores of Lake Geneva in the 1880s are radiant and painterly pictures with a distinct sense of ease and freedom that seemed to disappear as Mønsted matured into a Realist landscapist, albeit a widely-acclaimed one.

Whilst Mønsted never revealed an interest in aspects of the sublime in his work, he spent many summers on the shore of Lake Geneva and winters in the Engadine where, in the 1920s, he produced some of his finest snow scenes in and around Morteratsch and St. Moritz. In terms of an understanding and handling of snow in painting, in conjuring its texture and tones, Mønsted was a near equal to Gabriel Loppé, born a generation earlier. However, on his initial trips to Switzerland his interests were more geared to placid lake scenes and his pictures similarity to François Boçion’s scenery is no coincidence. At that time the Swiss painter, Boçion was acknowledged as the vedutist par excellence of Lake Geneva yet, curiously, there is no proof whether the two artists ever met despite lodging a few streets apart from one another in Ouchy.

A minor but, perhaps, interesting discrepancy with the exhibition catalogue from 1991 is that Mønsted probably painted this barge disgorging its blocks of stone on an April or May day rather than in high summer. With snow still much in evidence on the slopes of the mountains on the lake’s south shore, the light is nonetheless stark and by sweeping a well-defined line of springtime mist across the lake, Mønsted deftly created a sense of the dozen mile gap to the other side. Incidentally, Lake Geneva is at its widest- and deepest- at Lausanne.

Although Mønsted often opted for a conventional composition in most of his Swiss works, in this canvas he veered into a more daring arrangement with a marvellous interplay of perspective and the zig-zag of the varying masts. Using the strong diagonal created by the barge’s anchor rope, Mønsted echoed the lines in the three rolled sails. The complex pictorial planes against a double horizon formed by the quay and the lake, are offset by the sheen of the water and mountains.