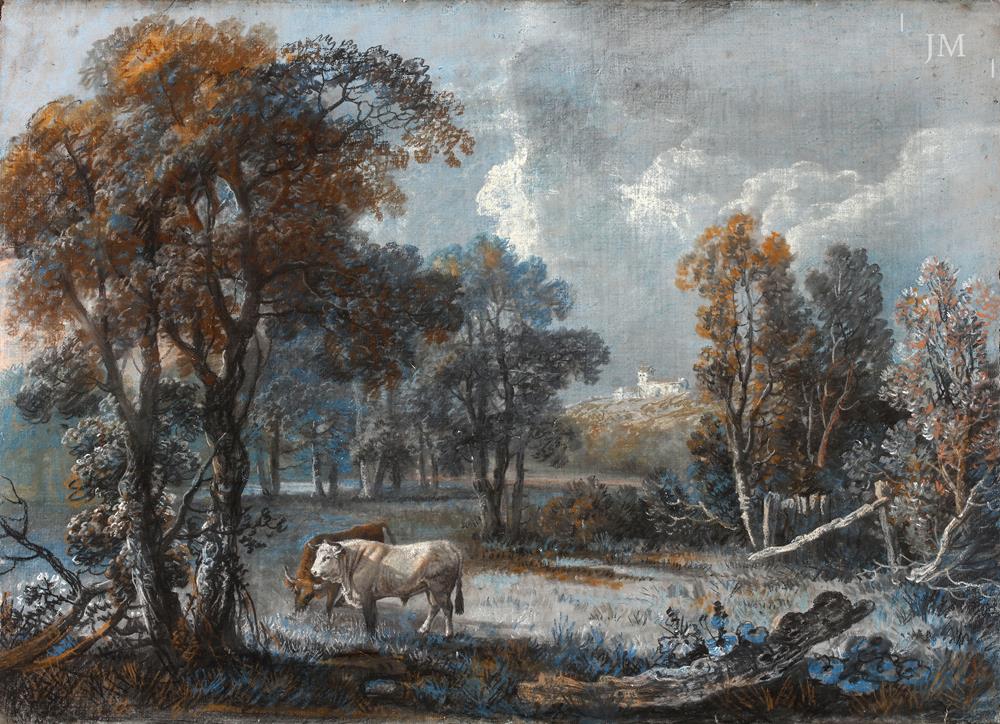 Forty years ago George Barret could still be described as ‘[b]y far the best-known Irish landscape painter’ – no casual hyperbole in some dealer’s catalogue, this, but the verdict of the leading scholars of traditional Irish art, Crookshank and Fitzgerald (see Bibliography). Today, however, to most picture collectors the term ‘Irish landscape’ means towering clouds over the Connemara uplands by Paul Henry (1896-1958), and Barret’s tranquil parkland scenes, with their imposing trees and romantic waterfalls have fallen into comparative obscurity. In some ways I can identify with this shift in taste: I have always admired the luminosity and veracity in Henry’s work, and he captured a version of Ireland that we recognise. Barret, on the other hand, was not really a painter of Ireland, but more a naturalistic landscape painter who happened to come from Dublin, and who made his career in England after 1763. His early Irish work is not thoroughly understood, although it is accepted that he matured early and was capable of an unexpected variety of styles, for example a series of overdoors and inset panels for Russbrorough in Wicklow, depicting Italianate scenery and Roman ruins. Scarcely any paintings from this period could, however, be said to be topographically accurate views, and it was more for its wild nature, with rocks, gullies and overhanging trees, that Barret felt inspired by the Dargle valley outside Dublin, where he worked for Lord Powerscourt.

George Barret was acquainted with Edmund Burke when he was studying at Trinity College, and would not only have known of the student’s ideas on the Sublime, famously to be published in 1757, but must as a result have actively sought contrast and drama in his compositions. Dispensing with ‘the airy rococo quality’ of his earliest work, Barret now established himself in this vein in England, first as a successful exhibitor at the Free Society and then as a Foundation Member of the Royal Academy in 1768. His work drew favourable comparisons with Claude and, perhaps because of his early appreciation of Irish landscape, Barret, along with the native Richard Wilson and Paul Sandby, was a pioneer of the Welsh picturesque view, and was described by his friend Burke as ‘a wonderful observer of the accidents of nature.’ His clients came to include many of the distinguished patrons of the day, including the Duke of Portland, Lord Dalkeith, Lord Rockingham and Lord George Cavendish, while his panorama of the Lake District at Norbury Park for William Locke was considered his masterpiece.

One of the enduring pleasures of dealing in the work of less exalted artists of the Georgian age is their capacity to surprise us more than two centuries later. This gracefully subtle work on paper by Barret turns on its head the accepted wisdom of our Irish scholars that ‘[h]e does not seem to have used pastel.’ They were, of course, well aware of his skill as a draughtsman and there is a late group of gouaches, mostly inspired by the Lake District and marked by a florid palette and clever use of light. There is no precedent in Barret, however, for the consummate use of coloured chalks seen here, and I should confess that at first glance the name Gainsborough came to mind, not an outrageous coincidence given that he and Barret were exact contemporaries. The most telling clue to Barret’s authorship lies in the splendid white bull, for even as early as 1808 a fellow artist, Edward Edwards, noted that Barret ‘sometimes painted animals which he executed in a bold and masterly manner’. Barret exhibited A Bull at the new Royal Academy in 1770, and there exist numerous drawings of cattle by him.

Careful examination of the fragile support has shown that Barret worked on a very fine sheet of paper, prepared with a wash of blue-grey bodycolour, and laid down on a piece of linen, unlined and still on its original stretcher. In this delicate, autumnal composition, said to be of Powerscourt but really rather timeless and ethereal, Barret indulges his fascination with Claude, and shows, in the words of Martin Hardie, ‘his fine sense of drawing combined with fluency and quiet, graceful colour.’