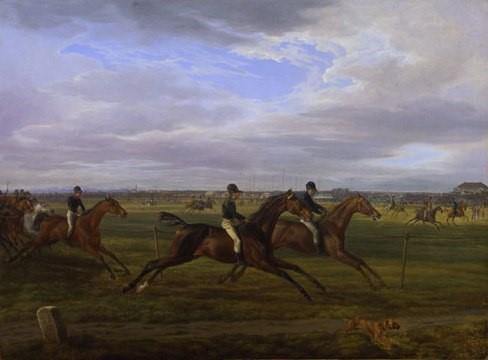 
Albrecht Adam was born in Nordlingen in 1786. He had many important patrons in his lifetime, including Maximilian I of Bavaria, Duke of Leuchtenberg, (Eugene de Beauharnais, son of Josephene Bonaparte) Marshal Radetzky in Vienna, Emperor Franz Josef of Austria and Napoleon III. He quickly gained a reputation as a fine horseman and, more importantly, as an up and coming equestrian and military painter.

Races at the Wies’n, dated 1825, is a rare subject for Adam and was completed in the 1820s, the most independent and versatile period of his career. During these years Adam successfully attempted new equestrian subject matter and here must be the perfect example, with its quality and animation. On October 17th, 1810, the crown prince, Ludwig, to become Ludwig I of Bavaria, married Princess Therese of Sachsen – Hildburghausen outside Munich. To commemorate the occasion the people of Munich were invited to attend the wedding followed by horse races. The event was so successful that it was held the following year and then annually thereafter. The Oktoberfest, as it became known, is now the biggest fair in the world with over six million visitors every year. The tradition of racing horses at the Wies’n continued uninterrupted until 1938.