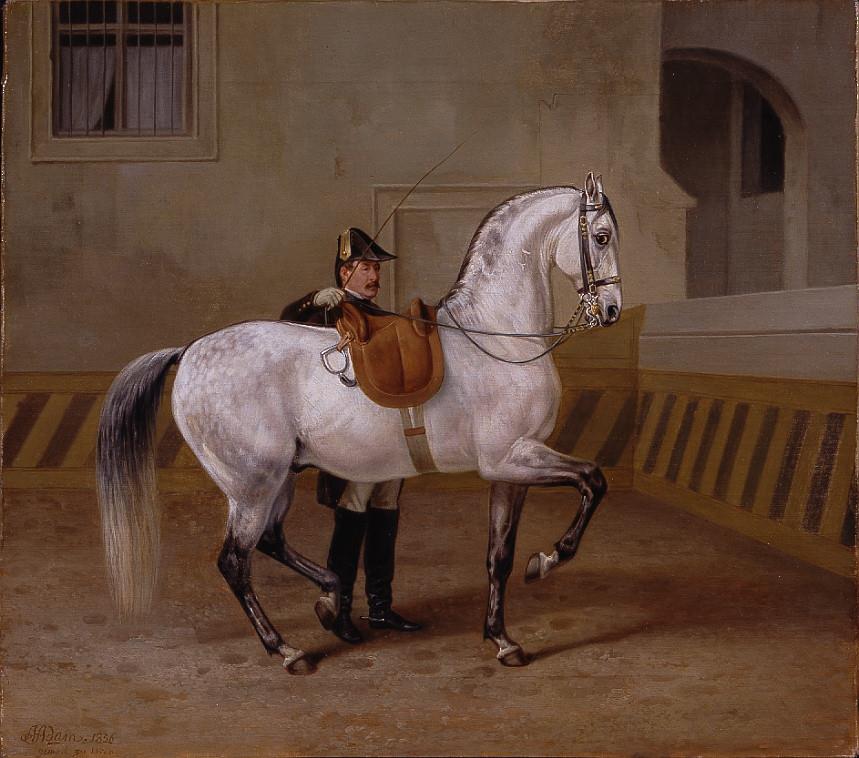 Provenance:
By descent in the family of Graf Carl Grünne, Equerry to the Emperor Franz Joseph

Albrecht Adam was born in Nordlingen in 1786. He was an avid sketcher and reader as a child and assembled a large copper etching collection. Around 1800, cavalry and artillery troops gathering in Norlingen were attractive subjects for Adam and here he earned his first commissioned works. On moving to Munich in 1807 to study, he first encountered pictures by Wouwermans, Potter and Van de Velde. During his stay in Munich Eugene Beauharnais, Duke of Leuchtenburg, became his patron. On and off, he was unofficially enrolled in the Army as a chronicler and painter in the tradition of Van der Meulen and Louis XIV’s battle painters. He accompanied the Duke of Leuchtenburg on his campaigns from 1810 to 1813.  His epic Retreat of the French Army, November 1812 (Maximilianeum, Munich) shows his observation of the devastating Russian winter. Adam became very well-known as a battle painter and received many commissions. Important works are the Battles of Borrodino (1812) and Zorndorf in the Munchener Residenz and the Mazimiliameum.

His talents as a horse and soldier genre painter had been excellently developed over his years with the Army and in 1824 the Duke of Leutenburg gave him enough freedom to take on more horse painting commissions. As the co-founder of the Munich Association in 1824, he sought to elevate the previously unesteemed status of ‘Tiemalerei’ – animal portraiture – by abolishing guilds of artists. Adam became more independent towards his subject matter. In 1828 he was painting portraits of th Duke of Schleswig-Holstein’s horses and in the following year, the Arabian horses belonging to King William of Wurttemberg. From the 1830’s onwards his three sons Benno, Franz and Eugen helped him with his work, thereby becoming individually accomplished painters. Between 1848 and 1852 Albrecht accompanied Field-Marshal Radetsky on his campaigns against Italy and also during the Hungarian Revolutionary Wars. By the 1850’s he was working for Kaiser Franz Joseph in Vienna and at the Spanish Riding School.

Three equestrian portraits of Radetzky were completed by Adam between 1848 and 1849, but on this occasion it is his cherished Lipizzaner that Adam, then in his seventieth year, has portrayed. This rediscovered, unlined canvas, still in its original frame, has all the charm of a true ‘animal portrait’ and shows the artist at his very best.