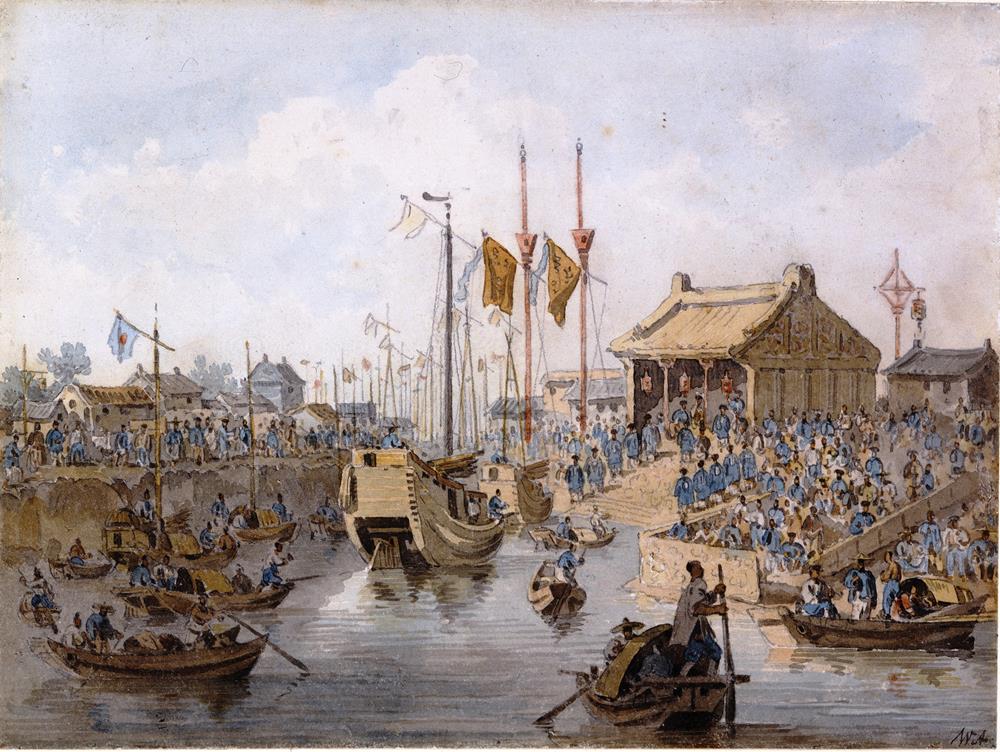 Born in Kent in 1767, William Alexander was briefly apprenticed to Julius Caesar Ibbetson (1759-1817) in London before enrolling in 1784 at the Royal Academy Schools.  In September 1792 Alexander embarked on what was both his first major professional commission and his life’s greatest opportunity: Lord Macartney’s embassy to China.  Unlike the other members of the artistic elite to which he belonged, Alexander owed his reputation to a single set of drawings which he made on this two-year expedition, and the focus of interest in the artist has not changed since.

Following the custom of other artist-travellers at this time, Alexander did not convert his sketches of China into finished watercolours until he had returned home.  Each year he sent one or more of these watercolours to the Royal Academy, where they continued to attract attention and served to advertise his published works both projected and current.  Thirteen of Alexander’s sixteen exhibits at the Royal Academy between 1795 and 1804 depicted Chinese subjects.

In 1802 he became the first Master of Landscape Drawing at the Royal Military College at Great Marlow.  During his vacations he made drawings (engraved and published from 1805 to 1807) of Egyptian antiquities in the British Museum, where he was appointed Assistant Keeper of Prints and Drawings in 1808.  He suffered from rheumatism, perhaps aggravated by the damp in this new building, and died eight years later aged forty-nine.

The Embassy to China

The purpose of an official expedition to China on behalf of the British government was to facilitate trade with that country, by establishing direct contact with the Imperial Court in Peking.  At the time all trading had to be conducted through the merchants of the East India Company in Canton, and they themselves were subject to severe restrictions.  Furthermore, it was felt that firm contact with the Imperial Court was the only way to overcome the sense of self-sufficiency, or xenophobia as Europeans saw it, with which Chinese civilisation was so deeply imbued.

The details of the expedition to Peking from 1792 to 1794 lie beyond the scope of this brief synopsis, and can be read about in numerous accounts published soon afterwards (see bibliography).

The ambassador, Lord Macartney, and his retinue (including Alexander as the official draughtsman) travelled from England in two ships and on their way called at Maderia, Rio de Janerio, Java and what is now Vietnam.  Macartney finally met the Emperor, Ch’en Long at Jehol, north of Peking, in September 1793.  As the embassy returned by inland waterway from Peking to Canton, Alexander made detailed sketches of the Chinese hinterland - something achieved by no British artist previously and by very few subsequently.  These sketches formed the basis for finished watercolours (such as the present one) and for numerous engravings by both himself and others.  For over fifty years his images of China were widely borrowed by book illustrators and by interior decorators in search of exotic themes.

The embassy passed through Tienstin (see map) both on its way to and from Peking, and the steeply-roofed structure at the centre of this composition is a theatre set up specifically for the occasion of the first visit in August 1793.  Alexander himself described the scene on their return a few months later:

On the 13th of October, 1793, the Embassy reached Tien-Sin, being then on the route towards Canton.  This building of mats (on the banks of the Un-leang) was constructed by order of the chief Mandarin of the city, for the purpose of complimenting the Ambassador, and entertaining him and his suite with refreshments.
The landing-place was decorated with mats, fancifully painted; the chief magistrate of the district sat in a chair, while the inferior mandarins stood in a rank on each side to receive his lordship, had he thought proper to disembark.  The entertainment consisted of a profusion of poultry, confectionery, fresh fruits, preserves and jars of wine, all which were distributed among the various barges of the Embassy, which are distinguished by their yellow flags. (Journal. fol.20v,)

Bibliography:
William Alexander, Journal, unpublished manuscript in British Museum, Add MS 35174
---------
Most or all of the illustrations in the publications below were derived from
Alexander’s watercolours: