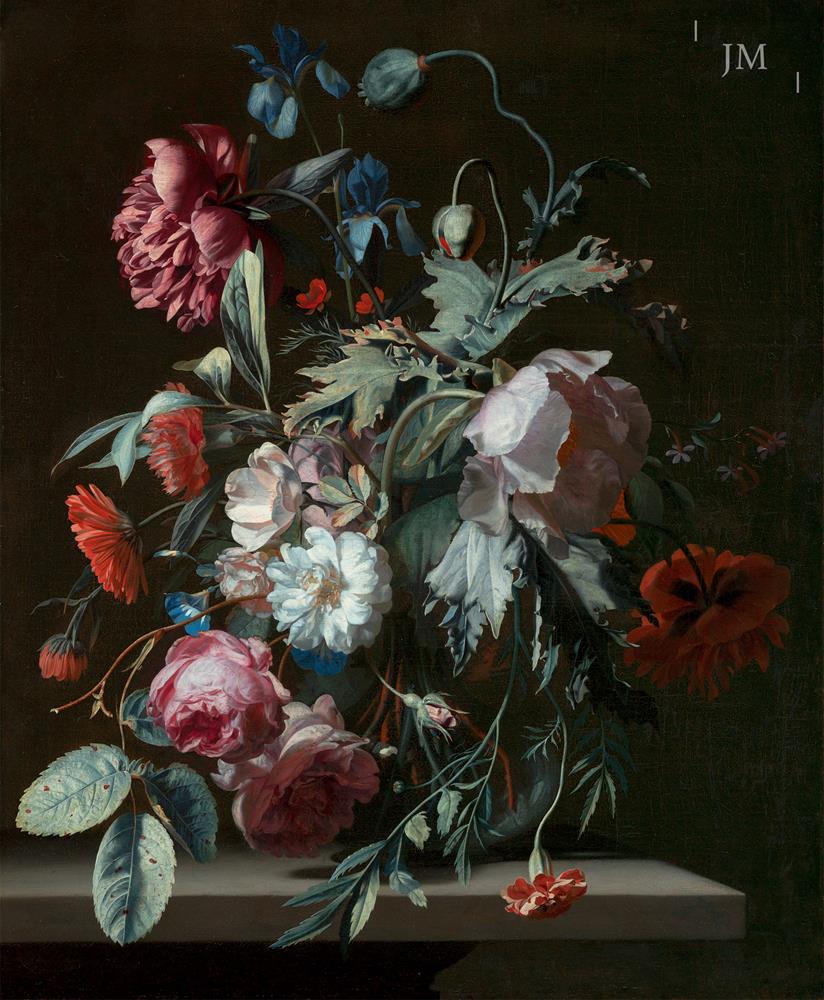 On a stone ledge stands a glass vase of roses, irises, peonies and poppies. A rose leaf hangs over the ledge at the left, while to the right is a carnation. With its greeny-grey leaves the poppy was a favourite of Verelst whose mastery of light, shadow and colouring empowered him to paint such sophisticated floral compositions; flowerpieces that would entrance Restoration London.
From a family of painters in the Hague, Simon Verelst left for England in 1669 having only spent a few years in his hometown’s prestigious painters’ guild, the Confrérie Pictura. Foreign artists were welcomed in London and with patronage from the Dukes of Buckingham and York, as well as the Earl of Shaftesbury, Verelst quickly made a name for himself as one of the most successful and expensive painters in the capital.
Recent exhibitions about Charles II and the Baroque movement in Britain have reminded us that the King owned six paintings by Verelst and along with the oft documented praise that Samuel Pepys lavished upon “a Dutchman newly come over, one Everelst” after a studio visit, this helps explains why he began styling himself as the ‘God of Flowers’ and the ‘King of Painters.’ Indeed, Pepys wrote in his famous dairy that he had felt compelled to touch one of the paintings in order to convince himself that the dew drops had in fact been painted. Alas, like the sumptuous flowers portrayed in his bouquets, Verelst’s laurels wilted and in the early 1680s he underwent a psychotic breakdown and was confined to an asylum. The painter recovered to some extent and remained active in London, also as a portraitist, but the magic of the early 1670s had gone.
Despite a remarkable career in England and one which benefitted from the lack of competition as a specialist flower painter outside of his native land, in his formative years Verelst was influenced by the work of Willem van Aelst from Delft. In developing his painterly brushwork combined with the use of buttery impasto in parts, it seems likely that Verelst had already refined his technique before he crossed the North Sea. In 1707 the painter and art theorist, Gerard de Lairesse wrote in his Groot Schilderboek that to his mind Verelst was the finest of all Dutch flower painters:
‘Yes, if there has ever been a distinguished flower painter, he was that man. Neither Mario de Fiori, nor Father Seghers, nor de Heem brought the art to such excellence….’
These words by a Dutch kenner and contemporary of the painter cannot be dismissed lightly and, in fairness, one could simply add that Simon Verelst ranks amongst the great names from the school of flower painting -a tradition that has long been championed and promoted by this firm.