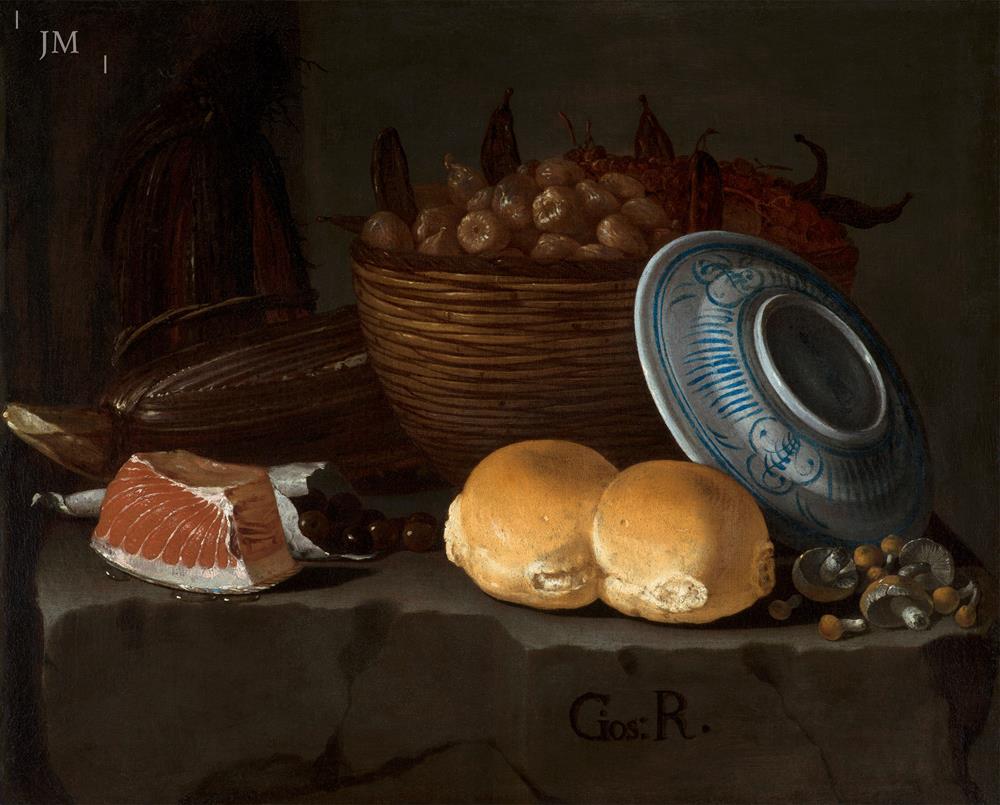 With the painter’s elegant initials seemingly carved into the crude stone ledge or table, this hitherto unrecorded ‘kitchen scene’ still life is a fine addition to Recco’s known work.

A distinctive double bread roll is placed next to some mushrooms in front of a basket of figs, grapes and bean pods which dominates the right-hand side of the composition. A blue and white maiolica plate is propped next to the basket capturing the light at its leading edges. On the far left of the ledge one or two cardoons have been laid out behind some black olives wrapped in paper and a succulent piece of tuna fish.

Giuseppe Recco came from a family of painters and played a leading role in the evolution of still life painting in seventeenth century Naples. His father, Giacomo, specialized in large flower compositions while his uncle, Giovanni Battista, produced fish paintings – a typically Neapolitan genre.

Throughout his distinguished career, Giuseppe also painted flowers as well as his celebrated still lifes of fish but it was the intensity in which he observed light and the clarity of his pictures which set his work apart from his contemporaries. His closest rival was Giuseppe Battista Ruoppolo (1629-1693 ) who Recco was known to have studied with under Paolo Porpora (1617-1673). Ruoppolo’s still lifes were decorative and theatrical whereas Recco was influenced by Flemish pictures which were popular and much admired in Naples at the time and, in particular, the Spanish realist tradition of the more austere bodegόn. These ‘kitchen interior’ still lifes are some of his finest works and like our picture suggest an early dating when Recco was aware of a group of bodegόnes by the Spaniard, Giuseppe de Ribera (1591-1652). There are similar ‘twin’ loaves of bread shown in a beautiful Recco in the Molinari Pradelli collection in Bologna as well as an important picture from the 1650s now in the National Museum of Capodimonte in Naples.

Although the biographical details remain unclear, later in his life Recco was called to work for Charles II of Spain. He was believed to have died in Alicante on his way to Madrid and yet other sources record him as having lived there for a number of years becoming a Knight in the Castilian Order of Calatrava.