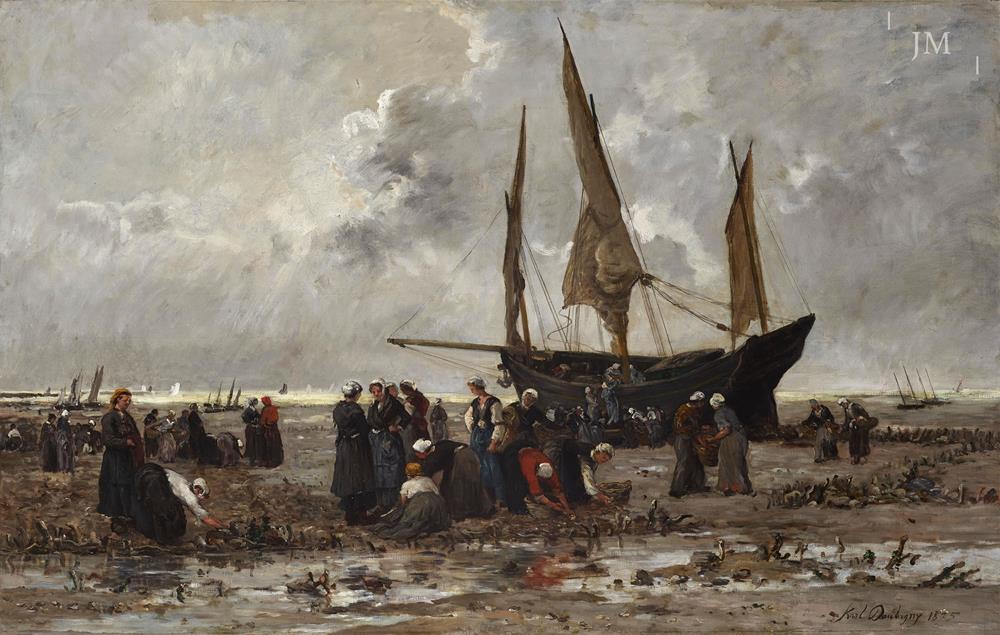 Despite his considerable ability and reputation as one of the most pleasing painters of the second half of the nineteenth century, Karl Daubigny’s artistic legacy has been rather eclipsed by that of his father, Charles- François (1817 – 1878). Karl’s father formed one of the principal links between the Barbizon school and the Impressionists.

The Daubigny family settled at Auvers-sur-Oise in 1860 and along with many other artists, known as the ‘Corot circle’, Charles- François established himself as exclusively a landscapist. He was particularly drawn to river subjects, building a studio barge, ‘le Botin’, from which he painted on the Seine, Marne and Oise. Karl learnt to paint alongside his father and with a lifelong friend, Antoine Guillemet, the Daubignys became well known for their sketching expeditions on their river barge.

Move beyond the influenced of his father’s landscapes Karl soon came to develop a more personal and sombre style. He began exhibiting at the Paris Salon in 1863, and won medals there in 1868 and 1874. Our Salon canvas is dated 1875 and another large format canvas also dated the same year, La vallée de la Scie, was acquired by the State and now hangs in the musée d’Orsay. 1875 was also the year Karl stood in for his elderly father as one of the pallbearers at Corot’s funeral.

His subject matter was drawn from views near Auvers, the forests of Fontainebleau and Normandy. Return of the fishing fleet to Trouville,1872 is an impressive painting now in the musée Granet in Aix-en-Provence and compares favourably with Loading a ‘lougre’ at low tide. The museums at Pau, Grenoble, Bayonne, Brest, Honfleur and Nancy all own examples of Karl Daubigny’s work, as well as numerous museums in the United States, notably Boston, Detroit and San Francisco. Daubigny’s seascapes were particularly sought after and the oyster gatherers and boats depicted in our 1875 canvas must have been a popular subject in a period now recognized for its excellence in paintings combining the livelihoods of coastal villages and landscapes as social realism, similar to those of Daubigny’s Dutch contemporaries, Maris and Mesdag.

The ‘lougre’ or ‘bisquine’ in the Norman dialect, was a three masted, gaff- rigged lugger peculiar to Normandy and the Pas-de-Calais. The large-barrelled hull was designed to take a sizeable haul, and the fisherfolk in their bonnets are taking advantage of the low tide to load as much kelp and oysters as can be gathered. In the distance sailing boats cross the horizon as the wind catches the lugger’s mainsheet under the slackened sails.