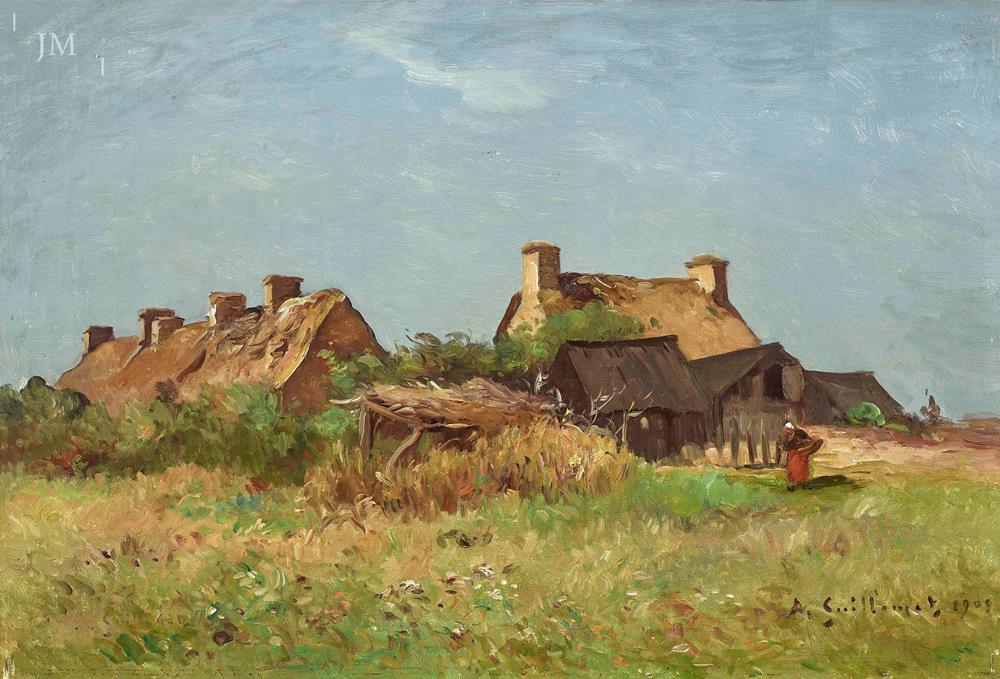 In Manet's 'Le Balcon' the tall, rather good-looking man standing behind Berthe Morisot and Fanny Claus, with a cigarette in hand, is Antoine Guillemet, who had, by then, already embarked on a very happy career as a painter. Yet Manet did more for his friend Guillemet than immortalise his appearance in this famous painting in the Louvre. He influenced the younger artist towards a painterly, impasto style of brushwork which was to remain characteristic of Guillemet's work until the end of his long life.

In later years, Guillemet told a newspaper critic how his father, a wealthy Normandy ship-owner, had not allowed him to go to sea as a boy. He had instead to content himself with painting the sea and shore, the river and its bank. Guillemet began doing so under the guidance of Corot, to whom he was devoted. His first Salon exhibits in 1865 were restrained in colour and touched with the misty tranquility of his teacher. Although Corot is always referred to as his teacher, Guillemet was eager to learn from others as well. He delighted to go out painting on the Seine with the Daubignys in their Botin, with 'Father' at his easel and young Karl Daubigny at the oars.

Guillemet made friends with an exceptionally wide circle of artists through the famous Cafe Guerbois meetings of the 1860s. Most of his contemporaries were the future Impressionists, however when in 1874, they decided to exhibit independently of the official Salon, in the face of constant rejection, Guillemet, like Manet preferred to keep to traditional paths. It was a fortunate decision as he would not have succeeded in trying to follow the new ideas. When repeated successes at the Salon won a place on the Salon jury for Guillemet in 1881, it gave him the right to introduce one painter without opposition. He seized the chance for Cezanne who had always been refused the admission which he so ardently wanted. Thus Cezanne appeared for the first time ever, listed as a pupil of Guillemet! When Guillemet became one of the 'Establishment' figures with high rank in the Legion of Honour, many Salon medals and several paintings in French museums, he was always respected because of his encouragement to others.

By the 1880s, the pattern of his life had settled into a curiously contrasted, but very contented, pattern. Winters were spent in Paris where his wit and charm were as highly prized as his paintings. Then suddenly, he would leave Paris for six months. The elegant boulevardier would be transformed into a roughly dressed, sunburnt figure rejoicing in the solitude of some obscure lodging near his beloved Normandy coast. There, he could devote himself without distraction to the vastness of the northern beaches and skies, conjuring up in his canvases the sound of waves.