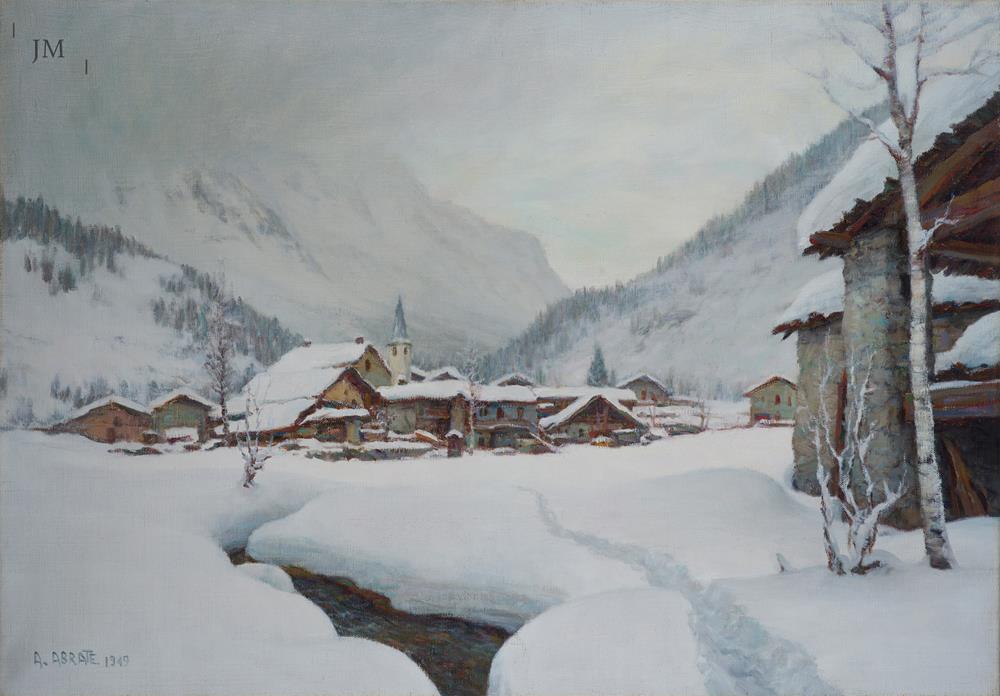 In 1942 the C.A.I. (the Italian Alpine Club) held a winter exhibition of Abrate’s pictures. Reviews of the exhibition portrayed him as always having ‘one hand on his ice-axe’ and extolled his unusual ability to paint above 3,000 metres. Born in Turin, Abrate was, in fact, an acknowledged and accomplished climber before the C.A.I.’s exhibition. He had joined the club in 1923 as well as the French Alpine Club a few years later making his mark in several notable climbs in the Mont Blanc region. He is best known for his first ascent in July 1923 of the south-west ridge of the Aguille de Leschaux (3370m) made with two fellow Piedmontese alpinists.

Abrate was a self-taught artist who like his contemporary and mentor, the Italian mountain painter, Cesare Maggi, established himself in the tradition of the peintres-alpinistes. The first exhibitions of his pictures were held in Turin in the mid- 1920s and were successful enough to encourage Abrate to show his work in Paris several years later in 1936 and 1937. Reviews of his Paris exhibitions focussed on his aptitude for painting snow in sub-zero conditions.

In the same manner as Gabriel Loppé a generation before, Abrate would force his climbing companions to loiter around whilst taking advantage of what he deemed the ideal conditions to paint in, regardless of the altitude and temperature. Abrate kept his painting kit to the minimum by using a specially constructed aluminium paint box strapped to his thigh. Putting his feet inside his rucksack and propping the open box on his knees, he could make rapid sketches using a palette knife to block in colours. In 1954 the art critic Joseph Budin wrote in Le Patriote about Abrate capturing the essence of high-altitude scenes, in particular his treatment of glaciers and crevasses: ‘He sees the mountain as a climber would before looking at it from a painter’s perspective and transmits his vision onto canvas with a masterly touch and finesse. In his studies, one feels the breeze and poetry from the summits, the purity of the air and the limpid light. His canvases diffuse a solemn silence.’

Before the outbreak of the Second World War, Abrate moved to Sallanches below Chamonix and built a studio from where he made countless painting trips into the Mont Blanc massif. At some state Abrate became a French citizen and subsequently divided his time between the Chamonix valleys and the Val d’Aosta where his pictures were much sought after, especially in Courmayeur. He painted almost continuously until the late 1970s and exhibited his pictures in Paris, Lyon, Marseille, Turin, Milan, Bologna, Aosta and Zermatt.

In 1975, Turin’s Galleria Fogliato put on a retrospective exhibition of more than one hundred of his paintings entitled: Cinquant’anni di pittura di Angelo Abrate (‘Fifty years of Angelo Abrate’s paintings’). Apart from consolidating his reputation as one of the leading mountain painters of his generation, the opportunity to see such a body of work all together also proved to what extent Abrate was a mountaineer’s painter, through and through.