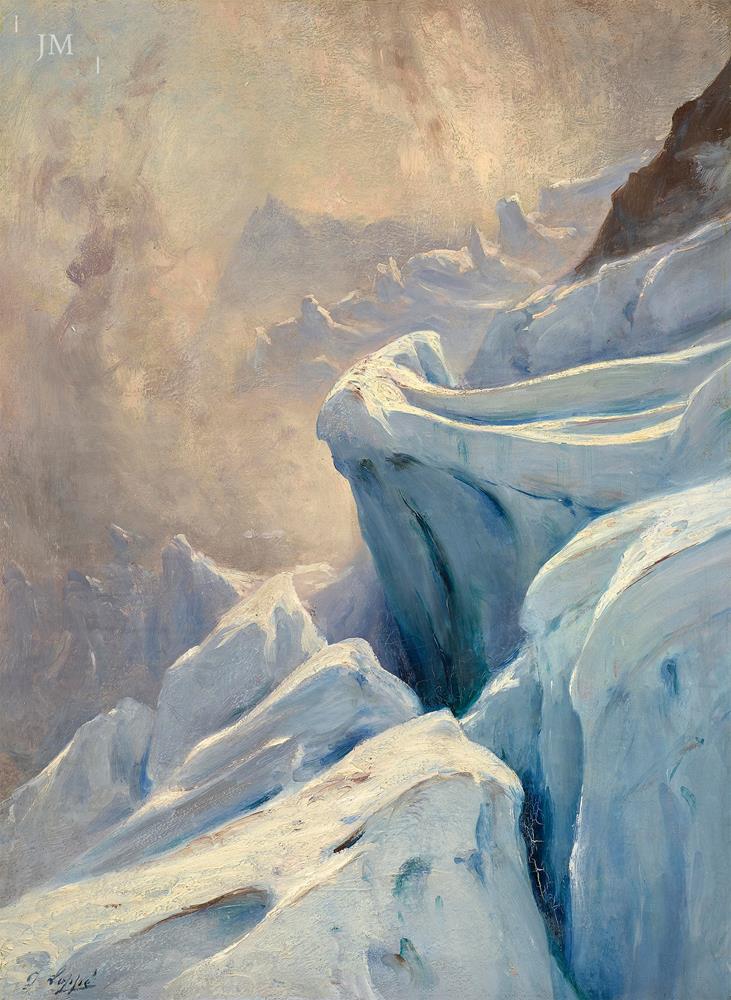 From a faded old label on the picture stretcher giving an address at 12, Kings Bench Walk, it has been established that this hitherto lost crevasse painting, together with the Sunset on Le Buet, belonged to Loppé’s great friend and climbing partner, Sir Alfred Wills. The two men first met in Chamonix in the early 1860s and became firm friends. Thanks to Wills, Loppé was made the first foreign member of the Alpine Club and as a result began exhibiting his pictures there. Both studies in this year’s catalogue were shown in London in 1878 and this Bossons picture was most likely hung next to its gigantic offspring, the four- metre canvas which now hangs rather incongruously in a conference room in Chamonix’s Le Majestic. As one of Loppé’s most famous and certainly most ambitious compositions, it was the star attraction of the town’s Musée Alpin collection until the terrible fire ravaged the building in 1999, destroying more than forty of his works. It is worth noting that Loppé included the climbers and their ladder in the finished picture to create scale or indicate the size of the enormous serac jutting off the glacier. And this is doubtless why he chose to paint the Aiguille du Midi in the background. Since the lifespan of such advanced ice shelves as shown here is brief, one of the most valuable consequences of finding these two studies, in particular Crevasses below the Grands Mulets, is the further validity they give to Loppé’s legacy as a peintre-alpiniste who worked from the motif at all times.