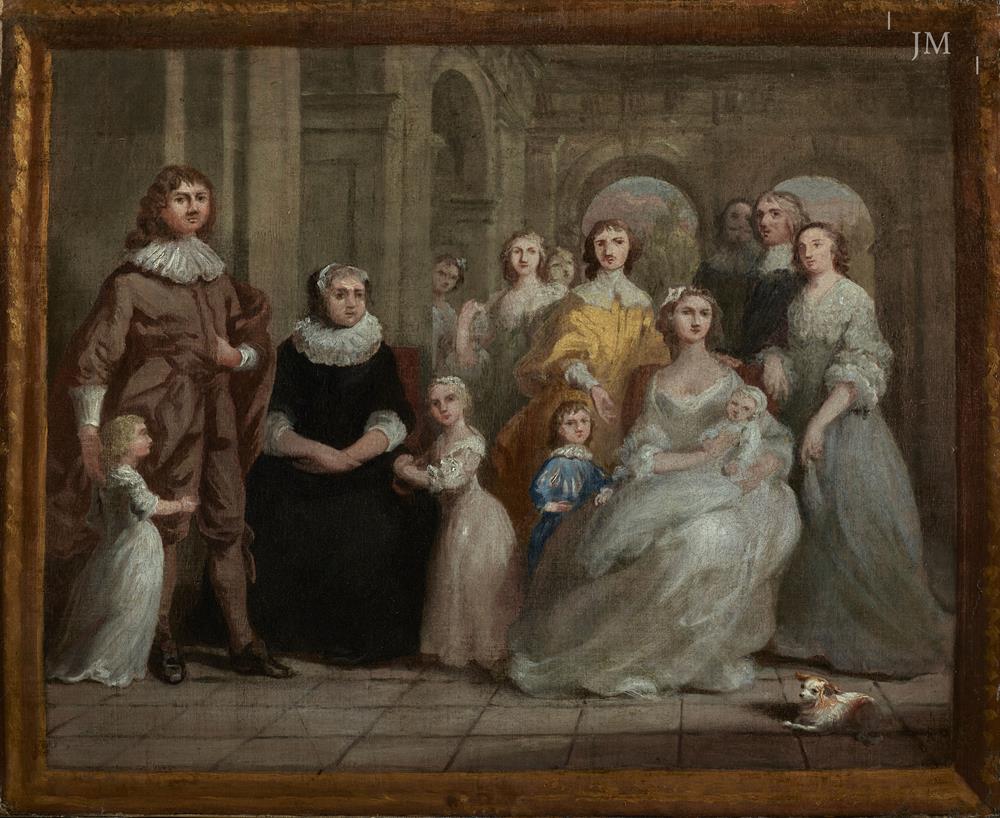 Sometimes a painting catches the imagination as much for its provenance as for its artistic
merits, and this oil sketch by Joseph Highmore is very much a case in point. Its first recorded
owner was Samuel Ireland (1744-1800), an antiquary, collector, engraver and writer best
known for his ruinous advocacy of his son William’s notorious Shakespeare forgeries. A more
recent owner, the art historian Edward Croft-Murray, was a distinguished keeper of drawings at the
British Museum, and before that a member of the Monuments, Fine Art & Archive Commission
(‘The Monuments Men’) in the Second World War, responsible for retrieving hidden artefacts in
Italy. Samuel Ireland valued this painting as the work of William Hogarth (1697-1764), whom he
may have known personally in his youth, and from whose widow he bought much of the extensive
collection of Hogarth’s work which he published in the 1790s. Croft-Murray, on the other hand,
was perhaps less concerned with authorship and more drawn to the painting for its affinity with the
subject on which he wrote a standard work of reference, Decorative Painting in England 1537-1837.

Highmore is one of the most engaging artists of the first Hanoverian period, and yet so obscure had
he become by the nineteenth century that even some of his most elaborate paintings had been reattributed
to Hogarth, for example The Angel of Mercy, ca. 1746 (Yale Center for British Art). Others
had never been considered to be anything but the work of Hogarth, and even though at no stage in
his career did Hogarth produce oil sketches such as ours, it was not correctly identified as by Joseph
Highmore until 1969 (see Literature). (A more substantial, finished group portrait now known to be
Highmore but formerly ascribed to Hogarth is The Rich Family (London, The Garrick Club).) In an
unscrupulous and implausible retelling of an old anecdote, Ireland alleged in his Graphic Illustrations
that, having disdained the art of portraiture, Hogarth was challenged by associates at the Academy he
had founded in St. Martin’s Lane to paint a portrait as well as Van Dyck, and that the present sketch
(latterly in Ireland’s possession) was the result. In ‘[striking] boldly into a path which he had never
trodden before,’ claimed Ireland, Hogarth produced something ‘much in the graceful and dignified
manner of Van Dyck.’ However, even before considering the differences in style, as Edwards has
observed, Hogarth ‘had already produced too many excellent portraits for any doubts of his ability
to be entertained’ and there would simply have been no need for him to produce a small sketch like
this. Instead the evidence for the attribution to Highmore is overwhelming and can be summarized
as follows.

Our sketch could easily be considered as a preparatory study for A Family Conversation Piece (Yale
Center for British Art). This was bought for the collection by Paul Mellon in 1976, and was therefore
probably unknown to Ralph Edwards when he published our picture seven years earlier, but the
similarities are conspicuous. The Yale canvas is slightly wider, and the sitters wear contemporary
rather than ‘historical’ costume, but in both compositions the figures are clustered into two distinct
groups with a senior matriarch and a younger lady seated at the centre of each. The same arcaded
archways are seen behind them in each picture, and the perspective is competently handled. These
palatial backgrounds and the ‘Van Dyck’ theme are foreshadowed in several sheets in a scrapbook of
Highmore’s drawings which were conceivably intended to be used for a series of paintings to illustrate
the novel Clarissa, similar to his earlier series prepared for Pamela, his best known work. It is known
that Highmore viewed at first hand the famous Van Dyck of The Family of the 4th Earl of Pembroke at
Wilton House near Salisbury and even reproduced, if in reverse, details and similar figure groupings
from the Pembroke painting in his The Family of Sir Eldred Lancelot Lee, 1736 (Wolverhampton
Art Gallery), the most ambitious portrait group he ever painted. Highmore’s awareness of the
fashion for historical clothing is exemplified in his lovely half-length Boy in Van Dyck Costume of
1748 (Waddesdon Manor, Bucks.) It is also of interest that in 1754 he published a pamphlet on
Rubens’ celebrated painted ceiling at the Banqueting House in Whitehall. As well as a serendipitous
connection with this sketch’s future owner and his concern for such decorative cycles, it suggests that
Highmore was particularly interested in the working methods – and by implication the preparatory
oil studies – of the two great Fleming artists at the court of Charles I. The trompe l’oeil frame in
our picture also relates to a number of Highmore’s pencil drawings for ‘conversations’, as they were
known, where the frames are indicated, in one case even with numerals to show the intended overall
dimensions. There exists a letter in which Highmore gives a lengthy explanation of his methods and
prices for ‘family pictures’, and the proposed frame might have been included to help his customer
finalise the desired scale. Lastly, the dots for eyes and mouth are a distinctive trait common to our
sketch and the pencil studies discussed above.

With its silvery tone and its restrained, delicate palette, this charming painting can be enjoyed today
both as a modello of a grand family portrait, and as a valuable insight into the working practice of an
artist in early Georgian Britain.