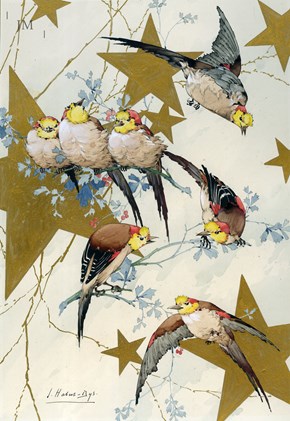 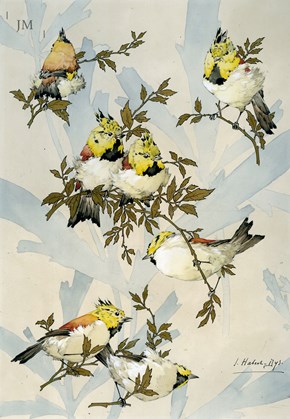 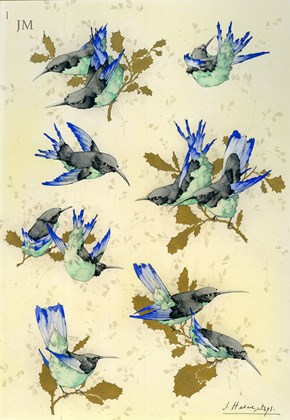 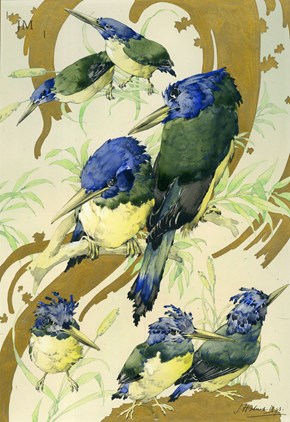 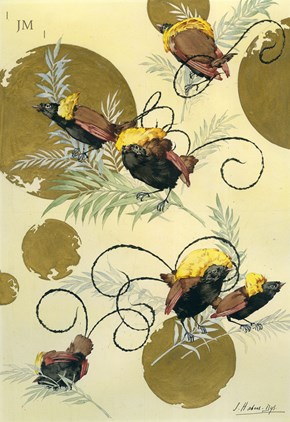 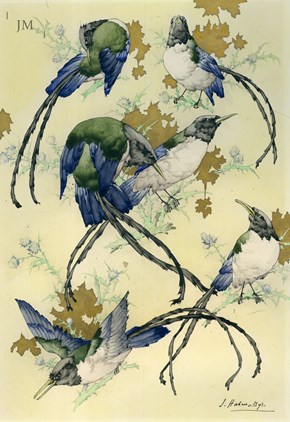 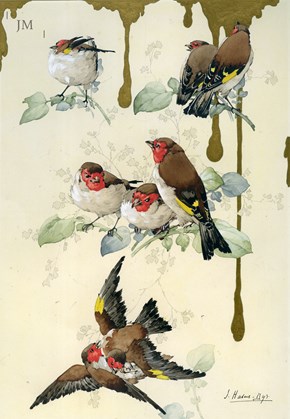 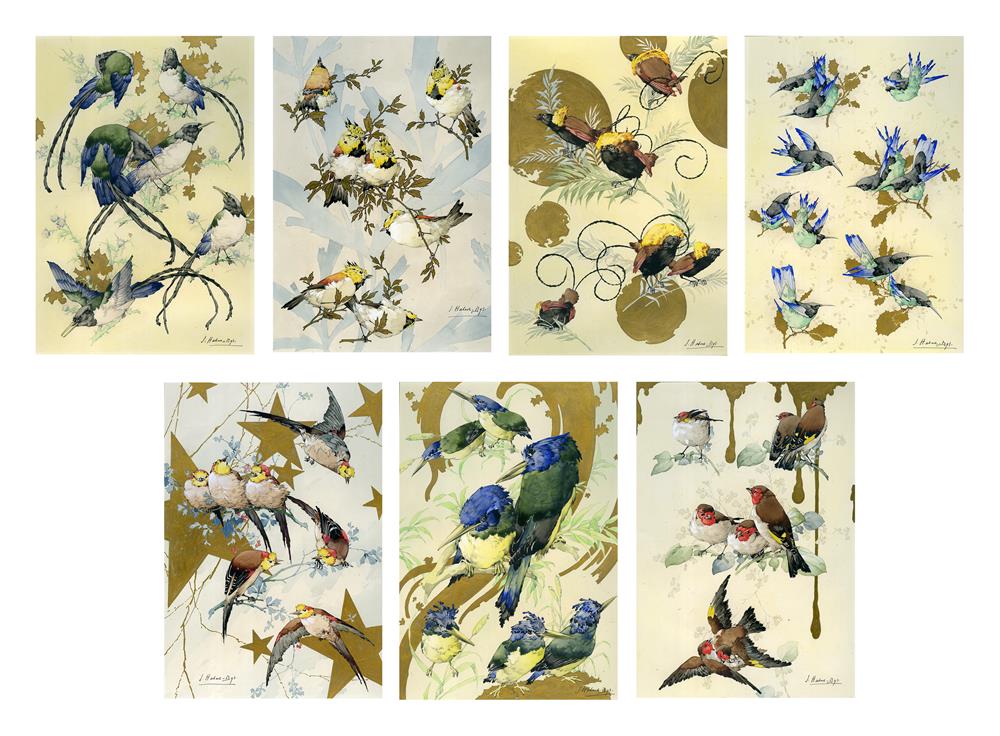 
watercolour, pencil and gold ink on paper
26 x 18 cm. each – a set of seven
each signed

These remarkable original watercolours by the French designer Jules Habert-Dys are as enchanting as they are rare. Habert-Dys was a gifted draughtsman and prolific designer working in 19th century France. Over his long career he made designs for jewellery, furniture, ceramics, wallpaper, prints, gold, silver and glasswork and lacquer. He had a great dexterity in working in so many mediums at such an accomplished level, and is chiefly remembered today for pioneering the free-flowing style that became Art Nouveau and peaked in popularity in the 1890s and 1900s. Despite a long and flourishing career it is highly unusual to find the original paintings that served as the template for publishers and designers, and the discovery of this fine set illustrate the Art Nouveau in its purest form.

Born in Fresnes in 1850 to a humble background, at the age of thirteen Habert-Dys entered the studio of the renowned ceramicist Ulysse Besnard. In 1874 he arrived in Paris and studied under Gérôme at the École des Beaux-Arts, while working in parallel for several leading ceramics manufacturers, designing for François Lauren, Haviland, and Eugene Schopin. In 1878 he finished his formal training with Gérôme, the same year that he saw the Japanese section at the Exposition Universelle, which proved to be an artistic revelation. Through the 1880s he was the exclusive illustrator for the weekly magazine L’Art, for which he made over 500 drawings. In 1885 his influential design manual Les Fantaisies Décoratives was published, becoming a standard reference for designers of the age, with motifs incorporating animals, plants and insects in intricate patterns, ready to be transplanted onto ceramics, fabrics, furniture, jewellery and wallpaper. Through the 1890s he solidified his reputation as one of the leading porcelain designers, creating services for major porcelain houses such as Pillivuyt.

It is in 1901, at the peak of the Art Nouveau period, that we arrive at the publication of Caprices Décoratifs,  a volume comprised of 32 colour plates of birds, flowers, landscape and fish. Like Fantaisies Décoratives before, it was made to serve as a reference manual for designers, however the illustrations in Caprices Décoratifs, for which our seven watercolours are originals, are markedly different from those in the earlier volume. The ornaments are not set in tight repeating patterns with borders, but in beautifully realised, free-flowing groups floating on the page. The influence of Japanese art is immediately evident with a strong use of line, flat areas of colour, silhouette and negative space, combined with the sinuous curves and asymmetry of Art Nouveau . Though each picture features several small groups that could be taken and used in other decorative works, Habert-Dys has clearly taken great care to ensure the overall composition of each page is balanced and pleasing to the viewer. Close inspection of the light pencil under drawing reveals the artist’s carefully constructed geometry that underpins the placement of the groups of birds.

For watercolours made in 1901, one is immediately struck by how fresh and modern they look. They are fortunate to have been kept together in an album by their original owner until now (the publisher of Caprices Décoratifs Henri Laurens), and as such are as fresh in contrast and saturation as the day they were painted, and in as immaculate a condition as one could hope for. They depict the birds of Europe, Asia, New-Guinea and Africa, with those that can be identified as goldfinches, kingfishers, hummingbirds and Wilson’s bird of paradise. Each group perches on a branch, contrasted against the flamboyant gold ink patterns in the background. Rather than designs with a specific end in mind, we are presented here with striking stand-alone works of art by a master draftsman at the height of his powers.

One of the main objectives of Art Nouveau was to break down the traditional distinction between the fine and applied arts, and this set of paintings prove the perfect synthesis of the two; virtuoso draughtsmanship combined with a mastery of tone and composition.