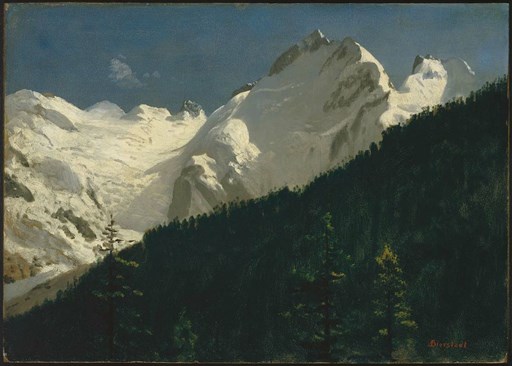 1946 was a busy time
for the founder of the firm, John Mitchell, then based in New York City.
A recent episode of the
BBC’s Fake or Fortune series was
dedicated to a successful re-authentication of a Brighton Beach painting by John
Constable, acquired that year by the MFA (Museum of Fine Arts) in Boston
from John Mitchell. Two years later, in 1948, Boston acquired another Constable also from John Mitchell. This major painting entitled The Stour Valley featured in the
background of the television programme.
Established in 1907 the
MFA has received many remarkable bequests over the past century including the
Karolik Collection of over two hundred American paintings. Maxim Karolik was an
opera singer who collected art with his wife, Martha Codman. In 1946 Karolik
bought four Albert Bierstadt oil
studies from John Mitchell, Seal Rocks (Farallons), A Geyser in Yellowstone, Storm in the Rockiesand and Piz Bernina. These now hang
in the MFA together with fifteen other
Bierstadts and seventy years on John Mitchell’s grandson, William, is a
specialist in the artist who inspired
Bierstadt’s work more than any other – the Swiss Alexandre Calame (1810-1864). (see Alpine)
In 1858 Bierstadt organised an exhibition in
his hometown of New Bedford, Massachusetts to showcase the work of the best
American artists of the time, as well as three contemporary European artists:
the English animal painter E.H. Landseer
(1802-1864) and two landscape painters, the Düsseldorf-based Andreas Achenbach (1815-1910) (see European Paintings) and Calame.
Bierstadt
travelled
to Lake Luzern from Düsseldorf in 1856 accompanied by his fellow American
artist, Worthington Whittredge (see Alpine) in the hope of meeting and
studying with Calame, whose work was
now known and collected all over Europe. Indeed in 1865 the ‘Central Park’
landscape architect, Frederick Law Olmsted, referred to Calame’s work when lobbying the American government to preserve the
Yosemite Valley in California
from loggers, settlers and speculators.
Although Calame’s lithographs were readily
available it is no exaggeration to claim that Albert Bierstadt introduced Calame
to an American public. In the last decade alone there have been three museum
exhibitions devoted to Alexandre
Calame’s paintings one in the USA, one in Norway and one in London’s
National Gallery (Forests Rocks Torrents,
June-September 2011).
Bierstadt,
a German-American, emulated Calame in
painting many Alpine scenes during his two year European sojourn in the 1850’s.
The Karolik Piz Bemina would make a
wonderful loan to our thirteenth Alpine exhibition next winter, Peaks and Glaciers!