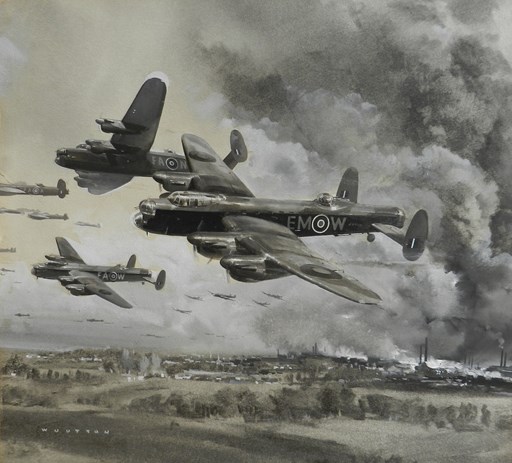 Although not in keeping with our
usual areas of specialization, we recently bought this gouache by Frank
Wootton (1911-1998) in a provincial sale. The doyen of ‘aviation artists’, Wootton
became well-known in Britain during the Second World War as his commercial
work was widely publicised, and today it is very unusual to find one of his
original studies.
By 1939 Frank Wootton already
had a best-selling book, How to Draw Aircraft, and therefore it is
no surprise that when he volunteered for the R.A.F. at the outbreak of the war
he was offered a special duty commission as official war artist. He painted
R.A.F. subjects in England, France and Belgium before travelling to south-east
Asia in 1945.
Our painting by Wootton (gouache
on card, 33 x 35cm) is the original artwork for an advertisement for AVRO
published in Flight magazine,
20th January 1944. It depicts the attack on the Schneider engineering factory
at Le Creusot, France on the 17th October 1942 by 94 AVRO Lancasters of No.5
Group.
Wootton was
recognised as probably the finest aviation artist of all time and was awarded
the O.B.E in 1995 for his services to aviation art during the Second World War.
Our gouache is advertised in the latest issue of Aeroplane, and is for sale at the gallery for £4,500.