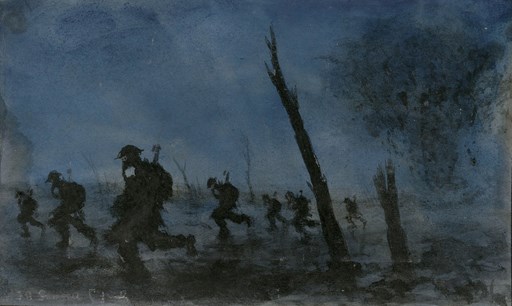 This year’s centenary of the outbreak
of the Great War, has evoked much renewed interest in the art that originated
from that devastating conflict. John
Mitchell Fine Paintings are offering four works for sale by Gunner F J Mears, two of them dated
1916 (please see under Artists).
Not much is known about Gunner Mears. He served on the Western
Front in the Royal Garrison Artillery at the Ypres salient and also on the Somme.
It is believed that he was commissioned by the War Office as an official artist
but his work lay largely undiscovered until a London gallery exhibited thirty of his
drawings in 1920. His haunting nocturnal images of the Messines Road with
shadowy figures hurrying from shell-blasts, or columns of men trudging wearily
to the front line, faceless and anonymous, caused a stir in the refines of Old
Bond Street. The Duke of Norfolk, Lady Astor and General Gough were just a few
of the distinguished buyers from that sell out exhibition that rescued Mears
from poverty.

His period watercolours are signed and
dated (usually 1916 or 1917) upside-down. When asked why he inverted his
signature Mears replied "The
whole of the World is upside down... Why then should my signature only be the
right way up?" Later undated works often depicted the same tree lined
roads, however, the Grim Reaper had replaced the figures of soldiers. He died
in 1929 as a result of gas inhalations sustained during the war.