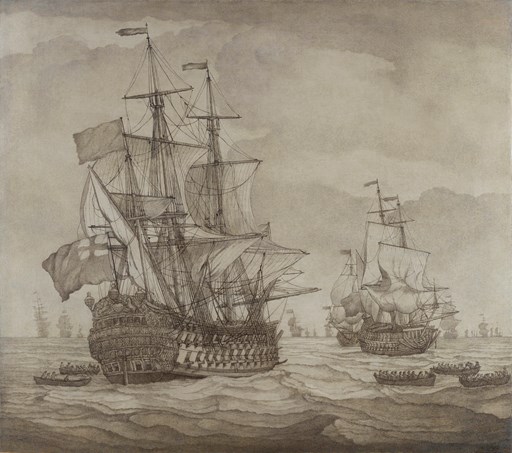 At Masterpiece we will be presenting this
very rare penschilderij (‘pen painting’) by the Dutch
seventeenth-century artist, Willem Van
de Velde the Elder (1611-1693). Last recorded in a sale in Germany
ninety years ago, this re-discovered work is a fascinating addition to the
known work of this famous master. Van de
Velde and his son, Willem the
Younger, are regarded as the most important marine artists in the history
of art, and their paintings found their way into many of the great collections
in Britain in the eighteenth and nineteenth centuries.
Van
de Velde the Elder specialized in highly finished,
precisely detailed compositions using the technique of ‘drawing’ with the brush
on a white ground, this being either a canvas or wooden panel prepared with a
fine layer of gesso (plaster) which would be delicately impressed with the
lines of his drawing. His paintings are few in number compared to the thousands
of drawings and sketches on paper which served him and his son as templates for
their more elaborate oils.
Our example shows a large English ship-of-the-line,
and is most unusual in dating from the very end of his life (c.1690), by which
time he and his son had been established as court painters in London for nearly
twenty years. The quality and accuracy of his work here reveal that Van de Velde the Elder’s talents
remained undimmed by the years, his mastery of the subject as assured and
competent as in his more familiar pen paintings of the 1650s and 1660s.
See us at Masterpiece 2014, Royal Hospital Chelsea, stand B17, 26th June - 2nd July.