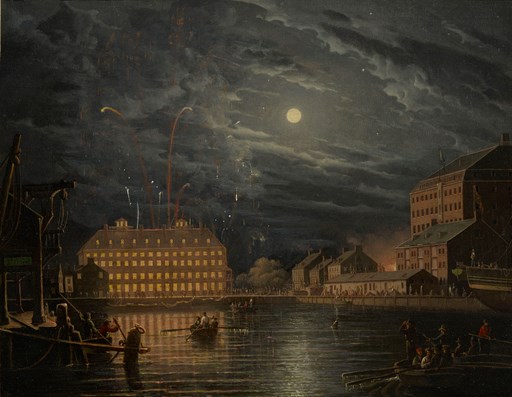 We have recently rediscovered in Europe this fascinating American painting by Robert Salmon which will go on display at our stand (B 17) at Masterpiece 2015.
Robert Salmon was an important marine artist who worked in England and America. His maritime subjects played a pivotal role in the development of the Luminist Movement in nineteenth century American landscape painting. Although this scene of a celebratory firework display, or ‘lumination’, was documented in Salmon’s original catalogue of his work and published in a 1971 monograph of the painter, its whereabouts have been unknown for over a century.
Research has shown that the evening in November 1837 was hosted by John W. Fenno, the
son and heir of the founder of The Gazette of the United States, a newspaper that played a major part in the shaping of party politics in the United States in the 1790s.
The banquet hall and hotel, Maverick House, served as both a summer resort for the wealthy and an overnight stay for people sailing to Europe or catching a train further north. It was subsequently owned by Patrick Kennedy, father of Joseph and grandfather of John F.Kennedy. Read more about this fascinating painting here.