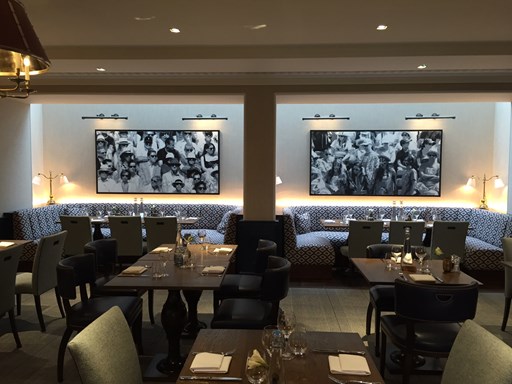 As a long-standing member of The Queen’s Club in west London, James Mitchell was able last year to secure an important commission for our ‘resident’ artist, James Hart Dyke, to do a series of paintings to adorn the newly-refurbished clubhouse. After more than a year’s work, costing several million pounds, the new bars and dining areas were formally opened to the members of Queen’s ten days ago, and James Hart Dyke’s fourteen pictures have already become a talking point. Illustrated here is the spectacular pair of oil paintings, each over six feet wide, of crowds watching the tennis at the Club last summer – one at the Aegon Championships in June, and the other at the now-famous Davis Cup tournament. Other paintings include a remarkable life-size study of the head groundsman at work, as well as Andrew Murray knocking up, and other scenes both on and off the courts. With over four thousand members to enjoy them all year round, and the many additional guests during the major tournaments, James Hart Dyke’s paintings will now reach a whole new audience, and be a lasting credit to this famous Club. For more photographs of the commissioned pictures please see James's website http://jameshartdyke.com/