A Summer Scene for a Cold January 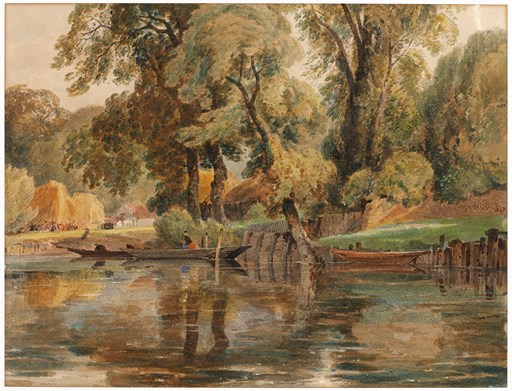 To stave off the depressing January weather and rail disputes, enjoy this wonderfully accomplished watercolour by George Arthur Fripp (1813 - 1896), and be transported to a late summer's afternoon punting on the Thames. See a detailed image here.

Fripp was a pupil of J.B. Pyne and Samuel Jackson. He spent several years as a portrait painter in his native Bristol before moving to London in 1841. He was acclaimed for a landscape in oils entitled Mont Blanc from above Courmayeur. Thereafter, he limited himself to watercolours. In 1872 or 1873 he was elected to membership of the Belgian society of watercolourists.
He was a prolific exhibitor, sending some 600 paintings to London exhibitions over 50 years. He ranks as an accomplished landscape painter, particularly of English subjects, and is noted above all for his delicate, virtually translucent palette. His work was admired by Queen Victoria, and in 1864 he stayed at Balmoral Castle in Scotland and produced a number of local scenes there.