The Father of English Watercolour 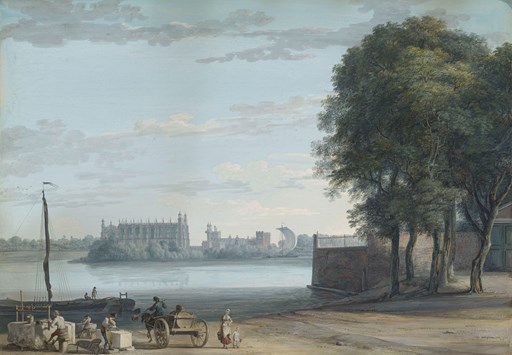 Paul Sandby’s traditional designation as the father of the English watercolour school has much justification. He freed watercolour from a subservient role to oil painting, and by the introduction of the aquatint process provided the ideal means for the reproduction of watercolours, widely diffusing their appeal. Sandby also mastered the Continental medium of bodycolour, or ‘gouache’ as it is also known, which the artist applies like oil paint, mixing in increasing amounts of white into the pigment to achieve lighter tones. As one art historian has memorably observed, "the decorative quality of bodycolour perfectly suits [Sandby’s] topography, imbuing his sunny mornings with a light-hearted, Haydnesque cheerfulness that has come to epitomise a certain aspect of eighteenth-century life.”
Shown here is just such an remarkable example, which we have recently sold to an American collector affiliated with a prominent Mid-Western museum. In the same private ownership since 1962, this highlight of eighteenth-century British art reminds us that a
well-preserved, fresh work on paper can sometimes be far more pleasing than an oil painting.