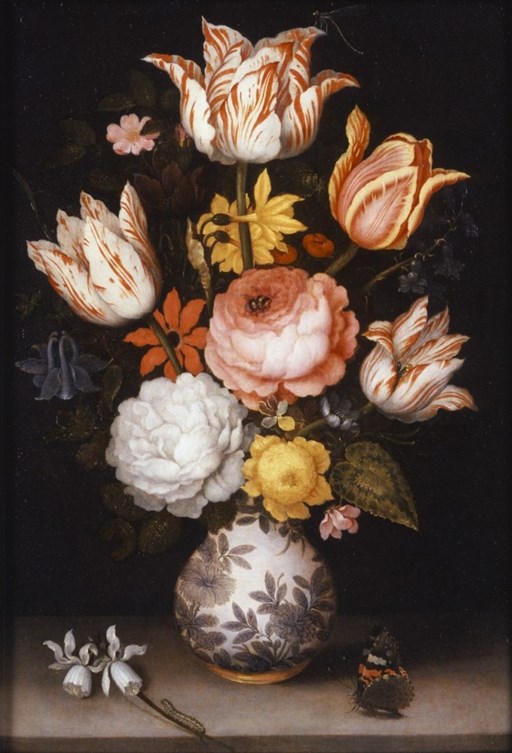 If you cannot make it to this year's TEFAF, but would like a dose of Dutch Old Masters, why not come and see our selection a little closer to home. Particularly this stunning and rare flower painting by Ambrosius Bosschaert the Elder (1573-1621). The flowers in our panel emerge in a mysterious fashion from the dark background and the brushwork consists of many layers of carefully built-up glazes. Bosschaert’s unique bouquets owe much of their mystery and magic to these techniques, unsurpassed by his contemporaries, and yet there are no traces of laboriousness in his methods. The effect was to hide any trace of how each flower was conceived in paint and, even today, they still defy the closest scrutiny with the naked eye. Nor did the artist’s powers diminish towards the end of his life. Arguably one of the best known flower paintings in the world is Bosschaert’s open background composition (the Mauritshuis, The Hague) which was definitely done after 1618 and Bouquet of Flowers in a Glass Vase dated 1621(National Gallery of Art, Washington) may have been his last painting but remains, nonetheless, one of his finest. Indeed Bosschaert’s life and the stylistic development of his work has been the subject of considerable scholarship since Laurens Bol published The Bosschaert Dynasty in 1960. Bol’s work initiated a renewed appreciation of Ambrosius the Elder’s role in developing flower painting and also examined for the first time his artistic legacy in the context of the Bosschaert family. Four of the next generation of flower painters that succeeded him were closely related to him, his three sons, Ambrosius the Younger, Abraham and Johannes and his brother-in-law, Balthasar van der Ast. How precise was Bol’s title: a dynasty indeed!