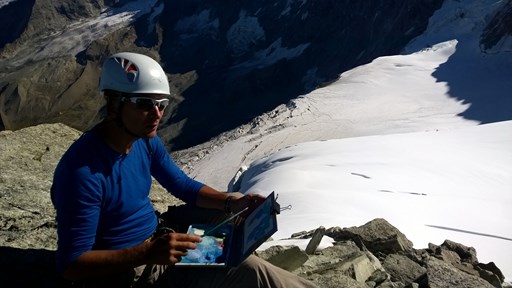 With his conquest of the Matterhorn one hundred and fifty years ago, Edward Whymper concluded his triumphant career as the most courageous and determined mountaineer of his generation. After a series of first ascents in 1864, Whymper had devised a remarkable campaign for the following season: he intended to scale all the significant unclimbed peaks and, principally, had his sights on the Matterhorn. During a period of twenty-four days between June and July, Whymper and his guides climbed five mountains and crossed eleven passes. Four of those summits were first ascents including the Grandes Jorasses and the Aiguille Verte. He ascended just over 100,000 feet in the process and covered the same distance going down.

This November, the narrative landscapist, James Hart Dyke, will exhibit thirty oil paintings and sketches made on his own ‘season’ in the Alps this summer, during which he trekked and climbed, retracing where possible Whymper’s footsteps.