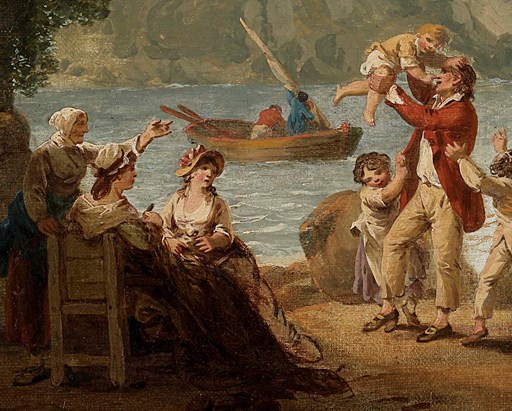 As spring arrives we are delighted to offer this charming Ibbetson oil painting of Orchard Bay. The remote southern side of the Isle of Wight, with its cliffs and rocky coves, was reputedly the haunt of wreckers and bootleggers, and this intensified the island’s romantic appeal to artists like de Loutherbourg, Ibbetson and, later, the Rev. Gilpin in his treatise of 1798 on Picturesque Beauty. Our summery, buoyant scene of a sailor’s homecoming was the last of a series of Isle of Wight subjects exhibited by Ibbetson at the Royal Academy in the 1790s, and is almost certainly the uplifting pendant to the gothick horror of his dramatic Storm: Back of the Isle of Wight now in the Cleveland Museum of Art in Ohio.
Copies of James Mitchell’s book on Ibbetson are available on request. Click here for detailed photographs of the painting.